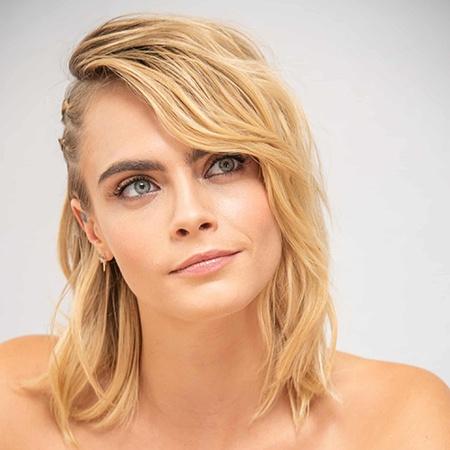 Her eyebrows launched 1,000 photoshoots but now the top model is making it big on screen – as an exiled faerie in a fantasy thriller opposite Orlando Bloom

‘Oh my gosh, I love your dress!” Cara Delevingne stretches out a hand and nods approvingly. It’s an offhand comment, but it still feels like a big compliment coming from someone who has twice been named model of the year at the British Fashion awards, the woman who singlehandedly sold bushy brows to the masses, and who – for a time – was so conspicuous that you could barely pick up a magazine without said brows staring back at you. For her part, Delevingne looks laid-back yet pristine, the same way wealthy people do at airports – sequin top and impractical-for-most white trousers; smudgy, kohl-rimmed eyes that are just the right side of slept in; a loose French plait slung over one shoulder; “curated” diamond piercings snaking up both ears. She chose her top because it was in the colours of the union jack but, come to think of it, she says, “it could be the American flag couldn’t it … or, er, French?”

However, Delevingne quickly puts the kibosh on the fashion chat, because she is an actor, too – and seemingly in it for the long haul. Since 2015, the 27-year-old has been on a break from her first career, the one in which the privileged goddaughter of Joan Collins became an unexpectedly relatable icon, ushering in the now ubiquitous pizza-noshing, Insta-friendly model who’s as likely to be talking about their mental health as they are jumping on a private jet (she once chartered Karl Lagerfeld’s to fly from Austria to London).

But while she still has lucrative endorsements with the likes of Burberry, Delevingne’s “it girl” days have given way to a new chapter. Having starred in Paper Towns – adapted from the hit young adult novel – space epic Valerian, and attention-deficit superhero romp Suicide Squad among other projects, she has showed her range and commitment to acting, even if the latter two films were widely panned.

Now she’s on to a new challenge, having landed her first starring role in a TV show, Amazon’s Carnival Row. The series marries the growing trend for fantasy TV sagas with an appealing amount of Victoriana and a whodunnit subplot. Delevingne plays Vignette, a faerie exiled from her homeland who ends up at the bottom of an increasingly divided feudal society. Filming took place in Prague, in temperatures of –10C. “It really added to the dire situation in the show,” Delevingne explains. “Plus you get takes done quicker because it’s just too cold!”

We meet at a plush London hotel where the launch for the programme is taking place – PR execs, reporters, foreign press and other assorted people in suits buzzing around a corridor of elegant suites. Delevingne’s here; her co-star Orlando Bloom – who plays the ornately named Rycroft Philostrate, Cockney detective and Vignette’s love interest – is on his way. As soon as I ask a question she speaks for a minute, barely drawing breath, keen to show her competence – and perhaps to steer the conversation away from her much talked-about personal life.

She starts with an answer to my question: was she a fan of Game of Thrones, the biggest fantasy series of them all, and the one Carnival Row seems designed to ape? The answer is no (“I didn’t watch it at the time, and then when I got Carnival Row, I was like, that would be too much. So I just started watching Drag Race.”) She doesn’t wait for the next question, and instead, politely but firmly, explains why she wanted to play Vignette. “I always get an instinct with characters, when I see the way their spirit is … I have to fight for the role and do everything I possibly can. And Vignette had this – as a woman she had this strength, [it] was unparalleled. But her strength was her vulnerability. No matter how much she gets knocked down or gets everything taken away from her, she still fights back.”

Delevingne then changes tack, speaking simply about the show’s themes. “I think the most important thing about it is the social commentary,” she explains. “I love the love story and the crime thriller, but I think it’s so interesting to see when fantasy really tries to play a part in talking about life. It gives you a different perspective, and it gives people whomaybe want to be ignorant of certain things more of a view as to how things are.”

What she’s primarily talking about is Vignette’s status as a refugee, something she hopes will draw attention to the plight of many in the present. “Because of when it’s set, it could fit the time, but why the hell is it happening now?” she says, brow furrowing. “That’s the main thing I want people to get from it.” Indeed, while Carnival Row has A Lot Going On for any one series, the constant is a sense of injustice. Vignette is treated like an animal by her masters, the upper-class Spurnrose siblings, with the faeries forced into sex work and servitude.

Though its politicians have names like Ritter Longerbane and Nigel Winetrout, the issues they’re debating – immigration and identity – are straight out of 2019. “Fantasy should allow you to escape into another world, but I also think that if you’re able to escape into a place where you can have a different perspective, why not lay on things people need to talk about in a way that’s not as intense as a documentary?”

Modelling isn’t fulfilling. A lot of the time, you don’t get your voice heard. I didn’t. Or maybe I didn’t have one

Delevingne’s seemingly in control of herself and her career, but how easy has it been to get people to take her seriously as an actor? “I like to make people laugh, so I think people have always found it hard to take me seriously,” she says, “but I’m very professional, I work extremely hard and also I like the fact that people were questioning my talent. Because to be honest, I like having to prove myself to people, you know. I don’t want an easy ride.”

Besides, she says, modelling “isn’t fulfilling, it’s not! Especially when a lot of the time, you don’t get your voice heard. I didn’t in so many ways. Or maybe I didn’t have one, or I didn’t have the confidence to feel like I had one. I always wanted to be an actor. That was always something I knew since I was a kid. Dreams don’t always come true, but they did.”

She’s bordering on earnestness. Surely there must be downsides to the job – Suicide Squad received a two-star review from the Observer, for example. “Reviews just ruin the process for me,” she says, looking bored. “People take what they want from it but also generally people love to critique things and I get that, that’s the way the world is. But it just doesn’t help me as a person, unless it’s constructive, which I love. But I’d rather have that from people I know and respect.”

Similarly, she’s uninterested in whatever new gossip abounds about her personal life, which has ranged from dating Harry Styles back in the day, to, er, purchasing a £400 leather sex bench with her current girlfriend, actor Ashley Benson (before Benson, she dated the musician St Vincent).

“Those things just fog your mind, you don’t need that kind of stuff in your life,” she says of the press coverage. “I wouldn’t even go and look at nice [articles] because I think that’s also blowing smoke up your arse, too. You have to feel that in yourself and not worry about other people.”

Does she think that being in a same-sex relationship might have heightened the media scrutiny around her and Benson, whom – if the latest headlines are to believed – she married in secret earlier this year? “I don’t know, but if there’s any sense of raising awareness for young girls or anyone to see relationships in a way where they’re like, that’s a possibility, then that’s great. But at the same time, I can’t be sure.” Either way, these days she has a comfortable attitude to her sexual fluidity and queerness – a far cry from when Harvey Weinstein told her that she would never get ahead in the industry if she was seen with a woman.

Fittingly, that’s the most Delevingne will give away about her personal life. These days, she’s here to act, and maybe to get behind the camera, too. “I wanted to go to AFI and do cinematography,” she says, referring to the American Film Institute, whose alumni include Andrea Arnold and David Lynch. “I’ll spend time on set and just sit with the director when I’m not shooting. Maybe I’ll do an internet course instead, if that’s a thing.”

Carnival Row has already been commissioned for a second series, but her next release will be a movie with Jaden Smith, Life in a Year, in which she plays a dying teenager. Filming it was, she says, “one of the best experiences ever. I think with these last couple of roles I’ve done, it’s definitely been a lot more heavy and … depthful, is that a word? Deep, I mean.” She smiles, momentarily adopting her trademark cross-eyed pose. She might be a serious actor these days, but you get the sense that Cara Delevingne still quite enjoys being a goofball.