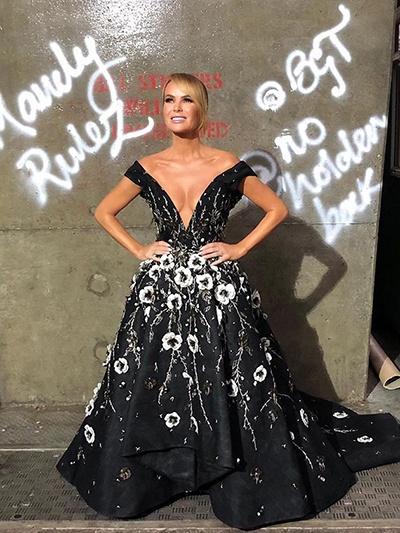 Amanda isn’t worried about any complaints

Amanda Holden has vowed to keep wearing skimpy outfits, despite a barrage of complaints, for one simple reason – her mum approves.

The BGT judge is often on the end of heavy criticism and Ofcom complaints because of her plunging necklines on the ITV show.

But the 48-year-old is showing no signs of making her wardrobe more conservative, she said: ‘When my mum was 48 she wouldn’t have dared wear a mini skirt, because she’s of the era where you wouldn’t dare get your knees out if you were nearly 50.

Speaking of her mum’s reaction to her daring ensembles, Amanda added: ‘She said, “Ooh, let them talk. You look better than girls half your age.”’

During this year’s Britain’s Got Talent, Amanda faced an Ofcom investigation for the risqué outfits she wore throughout the live semi-finals.

However, she ignored the complaints and hasn’t altered her style one bit, continuing the push the boundaries throughout the current run of Britain’s Got Talent: The Champions.

She added to the Mirror: “Of course, I have fun on Britain’s Got Talent – it’s the perfect opportunity to take risks.

‘Times have changed and I don’t feel anyone should feel pressure to dress for your age.

‘It’s all about body positivity and feeling good.’

Earlier this month, Amanda credited Britain’s Got Talent for freeing her of the ‘cheating wife’ label she was given after her affair with actor Neil Morrissey in 2000.

‘Starting out on Britain’s Got Talent was liberating for me,’ she told the Daily Mirror.

‘I mean, without dragging up my past, I think, at the time I was with Chris, we’d been together for something like five years but people still kept going on about Les and Neil, and all the other stuff.

‘So what was really nice was that anyone that might’ve had a preconceived idea of me could see who I really was and then really make their mind up.’