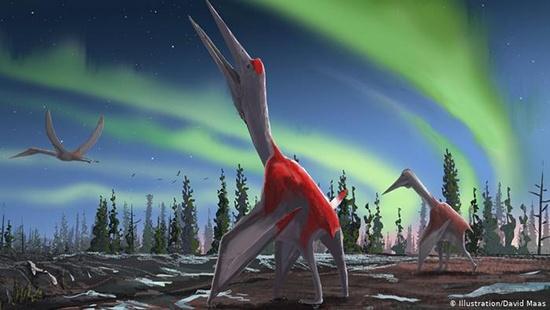 Called the “frozen dragon of the north,” a new species of flying dinosaur, Cryodrakon boreas, has been discovered in Canada. The pterosaur is thought to have had the wingspan of a small airplane.

A new species of flying dinosaur with a plane-sized wingspan was unveiled by researchers on Tuesday.

According to research published in the Journal of Vertebrate Paleontology, Cryodrakon boreas had a wingspan of 10 meters (32.8 feet) and weighed 250 kilograms (550 pounds). When standing, the dinosaur is estimated to have been the height of a giraffe.

David Hone, lead author of the study and a researcher at Queen Mary University in London, said Cryodrakon boreas means “frozen dragon of the north.”

The first fossil remains were actually discovered 30 years ago at Dinosaur Provincial Park in Alberta, Canada, but they were mistakenly not classified as belonging to a new species of pterosaur.

“It is great that we can identify Cryodrakon as being distinct to Quetzalcoatlus,” the other giant pterosaur for which it was initially mistaken, said Hone in a statement. “It means we have a better picture of the diversity and evolution of predatory pterosaurs in North America.”

Cryodrakon boreas lived about 77 million years ago. It is thought to have been carnivorous, feeding on on lizards, small mammals and even baby dinosaurs.

Although it could fly across the ocean, researchers said Cryodrakon boreas preferred an inland habitat.

“They were critical parts of global ecosystems worldwide during the age of dinosaurs, so they are key to understanding the ecology and extinctions of that time,” said Michael Habib, a researcher at the University of Southern California and co-author of the study.

“Just like flying animals today, they could carry important clues about how animals at the time responded to major changes in climate.”

Paleontologists estimate that there are more than 100 known species of pterosaurs.