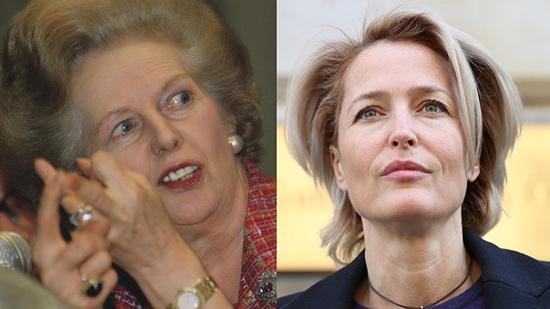 Netflix’s decision to cast X-Files icon Gillian Anderson as Margaret Thatcher in an upcoming season of ‘The Crown’ has been seen as ‘problematic’ by some social-justice-minded fans. Somebody remind them that it’s all make-believe.

‘The Crown’ follows the life and times of Queen Elizabeth II, the world’s longest-reigning monarch. With the fourth season set during the premiership of Thatcher, Netflix confirmed over the weekend that Anderson will assume the role of the controversial Iron Lady.

Cue hand-wringing and social-justice squirming. The equality brigade had a lot to unpack. Famed for her right-wing economic ideology, Thatcher broke labor unions, gutted the welfare state and privatized industry. She oversaw a crackdown on Republican activity in Northern Ireland, and retook the Falkland Islands from Argentina.

Thatcher was also decidedly un-woke, falling far behind the impeccable standards of 2019. She was a critic of immigration, introduced a law banning schools from telling children “they have an inalienable right to be gay,” and regarded feminism as “poison.”

Already worried about seeing their beloved Anderson play such a controversial figure, fans went into meltdown when the actress herself said that she was “falling in love with the icon, who, whether loved or despised, defined an era.”

“I always thought Anderson was a feminist,” one wrote. “I don’t think she knows what Thatcher stood for, I don’t think she gets it at all.”“Thatcher was a monster and a war criminal,” thundered another.

Gillian Anderson says about playing the role of Margaret Thatcher, “falling in love with the icon” I always thought Anderson was a feminist. I don’t think she knows what Thatcher stood for, I don’t think she gets it at all. pic.twitter.com/WVVuM21x9T

So Gillian Anderson is “falling in love with the icon”

Thatcher was a monster and war criminal who supported death squads in Northern Ireland, pandered to racism, and systematically persecuted the poor and working class of the UK. pic.twitter.com/75a5srMO3m

Have you heard the uproar about Gillian Anderson playing Margaret Thatcher in #TheCrown season 4?

News site thinkpieces weren’t above the hullabaloo either. “Let’s try to come to terms with Gillian Anderson playing Margaret Thatcher,” AV Club whined. “Claiming people will ‘fall in love’ with Thatcher is a dangerous thing in our current political climate,”warned Hypable, as if the preceding four decades of economic Thatcherism hadn’t happened and old Maggie was only controversial all of a sudden.

Some drooling fans also had to square away their ‘problematic’ feelings for Anderson, wondering whether they had to now quench their crush on the iconic actress.

Very much looking forward to being able to use the line “I haven’t felt this sexually conflicted since they cast Gillian Anderson as Margaret Thatcher in The Crown”.

What does an ideal world look like for these people? Should television be purged of all controversy, with liberal actors playing liberal heroes in an endless feedback loop of left-wing love?

To some, yes. Jared Leto was criticized for playing a transgender woman in ‘Dallas Buyers Club,’ with the social justice squad arguing that for true representation, that role should have gone to a transgender woman. Ditto for Elle Fanning in ‘3 Generations,’ and Hillary Swank in ‘Boys Don’t Cry.’

Dreamworks was accused of “whitewashing” its remake of Anime classic ‘Ghost in the Shell’ by casting Scarlett Johansson in a role they say should have gone to a Japanese woman. Decrying “whitewashing” as “toxic,” The Guardian celebrated British actor Ed Skrein’s decision to walk away from a role in comic-adaptation ‘Hellboy;’ a role that would have seen him play a half-Asian character, after an outpouring of rage from a small but vocal cadre of full-time complainers.

Skrien justified his departure by saying that taking the role would “continue a worrying tendency to obscure ethnic minority stories and voices in the arts.”

Skin color is one thing, but what about ideology? Anderson and Thatcher are both white women, so that’s that box checked, but much of the furor over Anderson’s role involves Thatcher’s controversial politics. Should she be played only by a hardened conservative actress? Thats’ assuming the Hollywood elite haven’t driven any remaining conservatives in tinseltown into the sea yet.

Hey, @THR, kindly report on everyone attending this event, so the rest of us can be clear about who we don’t wanna work with. Thx. https://t.co/7W3xPG3bI2

What about playing Hitler? German actor Bruno Ganz pulled off a convincing and critically acclaimed Fuehrer in 2004’s ‘Downfall.’ Under the new rules of ideological purity, Ganz should have rejected the role, leaving it for a genuine Nazi instead. That would have saved him from the sin of portraying an evil man, and ensured that the film industry’s “worrying tendency to obscure” white supremacist “stories and voices” would have been redressed.

For now, short of exhuming Margaret Thatcher’s body and propping her up in front of the cameras in a ‘Weekend at Bernie’s’-style rig, Anderson will have to do – while the thought-leaders of Twitter will have to remind themselves that it’s all make-believe.

A brief guide to economic stimuli in Eurasia

In France, Covid-19 rules are for everyone… almost: Dangerous poor suburbs are ‘not a priority’ for police lockdown enforcement