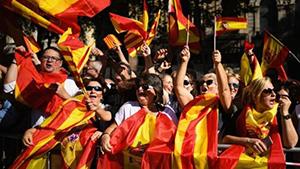 Kusai Kedri
Press TV, Barcelona
There were thousands on the streets of Barcelona Wednesday to celebrate Catalonia’s national day but this was no million march as in the previous 8 years.

Many pro-independence Catalans have opted out of the Diada, worn out by internal political bickering and eyeing an imminent verdict against 12 jailed leaders for their alleged role in the 2017 referendum.

The September 11 celebrations in Catalonia commemorate the fall of Barcelona at the hands of the Bourbon troops in 1714 and the subsequent loss of their sovereignty.

Today, historical grievances linger on and many Catalans feel the central government in Madrid is bent on crushing their movement and they expect Spanish courts to serve tough sentences against their leaders. Spain’s Supreme Court is expected to hand down the sentences by mid-October and pro-independence parties have yet to agree on a response in case of a guilty verdict.

Sitting Spanish Prime Minister Pedro Sanchez has drawn the ire of the separatist by referring to Catalonia as a territory. He made clear that Spain is unwilling to allow a referendum on independence in Catalonia anytime soon.

The simmering divisions inside the separatist bloc have taken a toll on Catalonia’s pro-independence movement. The million march Diada this year has drawn a little over half the usual crowd. A sign that movement is now fraying at the edges.