Global oil demand continues to see downgrades from major energy forecasters, with several downward revisions in just the past week.

The U.S. EIA said in its Short-Term Energy Outlook that it expects oil demand to grow by only 0.9 million barrels per day (mb/d) this year, the latest in a series of downgrades from the agency. In July, it said 2019 demand would grow by 1.1 mb/d and in June it said 1.2 mb/d. The EIA started off the year expecting demand to grow by 1.5 mb/d this year.

The point is not to pick on the EIA – just about every major forecaster has been forced to dramatically slash their numbers – but rather the global economy has slowed down by much more than expected. If the roughly 890,000-bpd demand growth figure comes to pass as the EIA now predicts, it would be the first time since 2011 that oil demand grew by less than 1 mb/d.

OPEC also cut its forecast to about 1 mb/d in its latest report, down 80,000 bpd from last month, citing a slowing global economy. “This highlights the shared responsibility of all producing countries to support oil market stability to avoid unwanted volatility and a potential relapse into market imbalance,” OPEC said in its report. At the same time, the cartel’s production rose by 136,000 bpd in August from a month earlier, led by a significant increase from Saudi Arabia.

The U.S.-China trade war looms as the largest drag on economic growth. China’s car sales fell by about 13 percent in the first half of the year compared to the same period in 2018. Car sales have now declined in 14 out of the last 15 months. India’s car sales have also plunged recently, falling by a whopping 41 percent in August from a year earlier.

“We came away from meetings with Energy consumers in China last week with greater confidence that we are likely to see deceleration in China oil demand growth in 2020 vs. 2019. There was little outright bullishness, unlike meetings at last year’s conference,” Goldman Sachs analysts wrote in a note after a trip to China. “Companies/investors in our conversations were broadly not optimistic that we would see a resolution of US/China trade tensions in the next 6-12 months.”

The investment bank said that there is downside risk to its demand forecast due to the odds of a further economic slowdown. Goldman expects Brent to average just $60 per barrel in 2020.

“There is simply no strong engine for growth in the market. Large economies are constrained by geopolitical uncertainty (Trade War/Brexit), while emerging/developing economies are dealing with this and relatively high prices,” Richard Gorry, managing director at JBC Asia in Singapore, told Reuters.

Low oil prices are feeding through to lower activity, which could yet lead to slower production growth and higher oil prices. But for now, spending cuts are hitting the shale patch, so much so that the services industry is heading into a recession and outright contraction, according to Rystad Energy.

Goldman Sachs says that OPEC+ cuts are going to be needed through 2020, and only in 2021 will things start to tighten up. By then, the “meaningful falloff of long lead time project addictions” will start to be felt. These are the projects that were scrapped after the 2014-2016 oil bust. Several years on, the dearth of new projects is expected to lead to a drop off of new supply. Also, Goldman says that U.S. shale growth will see deceleration, removing another source of supply growth that has characterized the oil market over the past decade.

Until then, however, the oil market will remain in the doldrums.

There are some signs that the U.S. and China are itching for a deal. China said on Wednesday that it would exempt some products from its planned tariffs, a small olive branch aimed at diffusing tensions. The move comes ahead of a planned meeting between the two sides in October. It’s not clear what might stem from this move, but it’s conceivable that the U.S. may respond with something as well, perhaps a delay of planned tariffs.

Still, a major trade breakthrough remains a far way off. In the meantime, oil prices languish. 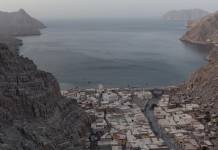 This Country Is A Safehaven In An Unstable Middle East