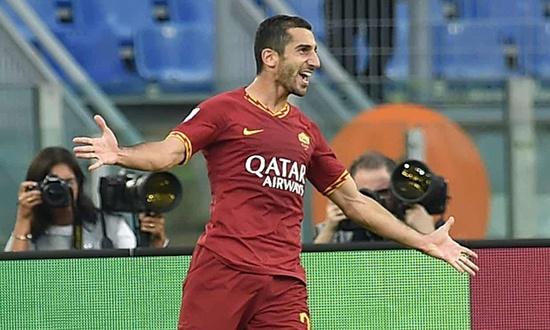 Henrikh Mkhitaryan marked his debut with a goal as Roma claimed their first win under Paulo Fonseca by beating Sassuolo 4-2 at the Stadio Olimpico.

The hosts raced into a 2-0 lead through Bryan Cristante’s header in the 12th minute and an Edin Dzeko finish seven minutes later. Mkhitaryan, on loan from Arsenal, struck a third after 22 minutes and Justin Kluivert made it 4-0 just after the half-hour mark. Sassuolo replied with two goals from Domenico Berardi, a 53rd-minute free-kick and a left-footed effort in the 72nd minute.

Bologna are second after a second-half comeback saw them defeat 10-man Brescia 4-3 at Stadio Mario Rigamonti, Riccardo Orsolini scoring the winner with 10 minutes to go. Atalanta are sixth after emerging with a 2-1 victory from a dramatic conclusion to their match away against Genova. Duvan Zapata struck the winner in the fifth minute of stoppage time, four minutes after Domenico Criscito had equalised with a penalty.

In La Liga a masterfully taken free-kick by the Sevilla midfielder Joan Jordán earned a 1-0 victory at Alavés and lifted his unbeaten team to the top of the table.

Jordán struck in the 38th minute for Julen Lopetegui’s side, who host Real Madrid next weekend. Lopetegui had a short stint in charge of Real last season.

Atlético Madrid are one point behind, followed by Real Madrid and Athletic Bilbao two points back. The defending champions, Barcelona, and Real Sociedad are three points off the pace.

In France Dario Benedetto’s dream start to life with Marseille continued on Sunday when the Argentinian striker’s double inspired them to a 4-3 Ligue 1 win at struggling Monaco.

Benedetto scored each side of the interval with Valère Germain and Dimitri Payet also finding the back of the net after Monaco had taken a 2-0 lead thanks to Wissam Ben Yedder, who limped off the pitch injured in the second half.

Marseille, with Benedetto having scored five goals since joining from Boca Juniors during the close season, are fourth on 10 points, two behind the leaders, Paris St Germain.