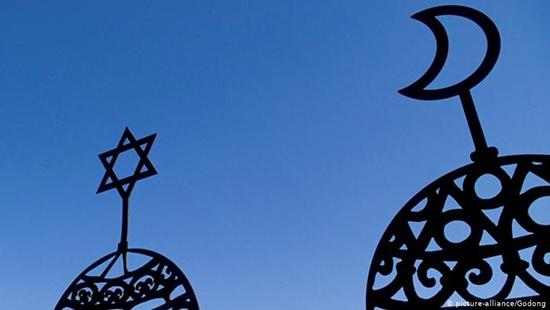 Imams and rabbis from across Europe are attending a summit in Italy organized by the Muslim Jewish Leadership Council. Anti-Semitism, Islamophobia and right-wing populism are all topics they’d like to address better.

Although the site is remote, it has plenty of symbolism: Beginning this Sunday, Jewish and Muslim religious leaders from some 15 countries will meet in the southern Italian city of Matera, one of Europe’s 2019 cultural capitals, to take part in the Jewish European Islamic Summit. The leaders are laying the groundwork that will allow them to speak out together more strongly on the issues affecting them.

“I think the project, in this particular arrangement, is rather unique. It is a tender blossom that must be nurtured and that deserves further support,” Tarafa Baghajati tells DW. Baghajati, a civil engineer from Vienna, is one of Austria’s more prominent imams. Together with others, the 58-year-old founded the Initiative of Austrian Muslims (IMÖ) in 1999. He was also involved in the creation of Platform Christians and Muslims, founded in 2006. He will be taking part in the summit in Matera.

Into the future, side by side

The project is indeed unique. In Europe, generally, Jewish and Muslim leaders often only appear together at public events hosted by politicians, at three-way dialogues between Christians, Jews and Muslims, or at interfaith conferences.

But three years ago, another group was founded: the Muslim Jewish Leadership Council (MJLC). It was established when a total of 14 European Jewish and Muslim leaders met in Vienna at the King Abdullah bin Abdulaziz International Centre for Interreligious and Intercultural Dialogue, known as KAICIID.

At first, the MJLC was a small group. Notably, Rabbi Pinchas Goldschmidt, the president of the Conference of European Rabbis (CER), was a member from the start. Over the course of several meetings, mutual trust grew and a true exchange began. The MJLC organized the conference in Matera.

While the KAICIID is financed by Saudi Arabia, it is respected among experts. Yet it is currently under threat. In June, the lower house of Austria’s parliament voted to withdraw from the international organization and moved to cancel the agreement establishing Vienna as the KAICIID’s headquarters, leaving KAICIID’s future uncertain. Austria was one of the group’s initial founders, along with Saudi Arabia and Spain.

Yet, the Matera meeting of Jewish and Muslim religious leaders represents a new dimension in a dialogue that is often overshadowed by the Middle East conflict. Imams and rabbis from Ireland to Greece and Romania, from Lithuania to Portugal, will be in attendance. CER Secretary General Gady Gronich told DW that in choosing Matera, the group wanted to underline the fact, “that we are all part of Europe’s culture.”

Moreover, Gronich added, Italy, like many other European countries currently governed by right-wing populists, recently sought to limit religious practices related to the slaughtering of animals and the circumcision of young men, both of which are common in Judaism and Islam. For now, those initiatives have been put aside, he said.

Gronich says Europe’s Jewish and Muslim communities are both very concerned about such political attempts aimed at limiting religious practices. He explained that in Matera, both sides hope to create a new committee. Comprised of two Jewish and two Muslim leaders, the committee would be able to publicly address controversial topics and discuss them with political leaders in Brussels or other European capitals.

Baghajati also talked about these concrete attempts to limit religious practice and immediately referred to the “rise of right-wing populists” across the continent. He pointed to the Alternative for Germany (AfD), far-right parties in Austria, Matteo Salvini and his League party in Italy, and Geert Wilders’ Party for Freedom (PVV) in the Netherlands.

Baghajati said such groups push Islamophobia, “mainly against refugees, but also against Muslims in general, as a political platform with populist overtones.” He pointed out that although such sentiments were being peddled 20 years ago, some of the groups using them have now assumed governing power.

“That is why we are saying, ‘nip it in the bud.’ And who better to sound the alarm than Jews or Muslims,” Baghajati said. “Together, we want to show that a liberal Europe, one of openness and with respect for human rights, is the right way forward.”

Standing up against anti-Semitism

Another topic that leaders from the MJLC and others gathered in Matera will discuss is the problem of anti-Semitism among refugees and migrants.

“Instances of anti-Semitism among migrants is troubling,” Granich said. “Unforunately, we’re hearing of such cases more frequently, on a weekly basis. Nevertheless, the Jewish community has many Muslim partners and friends across Europe who stand with us in opposition to it.”

Gronich said a number of “formal and informal” discussions aimed at tackling the problem have already taken place. He added that, “We cannot forget that there are a number of groups on the Muslim side that do not want to talk to us. It’s not all rosy, and not everyone is willing to engage in dialogue. But we want to exchange ideas with those who are willing to talk, so that we can build a future together.”

A role model for Europe

Of course, much dialogue happens beyond public view, such as last year, when a group of 30 rabbis visited Tunisia.

In Berlin, rabbis and imams have worked together in a more public fashion over the years. And recently, religious leaders have taken to accompanying young Jews and Muslims on visits to the Auschwitz-Birkenau Memorial and Musuem, a former Nazi German concentration and extermination camp located in what is today Poland, in order to foster understanding of the Holocaust.

Baghajati spoke of the “very positive experience” both sides have enjoyed in Austria. He said rabbis and imams have taken members of their communities along on trips together, and that the groups have stood in solidarity with one another when confronted with anti-Semitic or Islamophobic attacks. In his opinion, the relationship is “exemplary for Europe.”

Another thing Baghajati finds remarkable is the fact that, “Imams and rabbis are coming together on their own, without third-party mediation — here in Europe, outside the Middle East. And that they’re saying, we don’t want anyone to tell us how relations between Jews and Muslims have to be.”

“If intellectuals or religious dignitaries — imams and rabbis — on both sides don’t do this, who will?” he added.