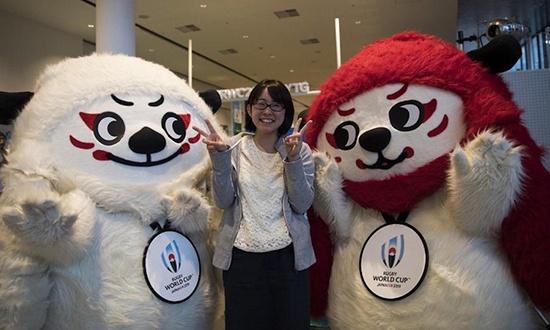 The Japanese love a mascot.

Good luck finding a place – any place – that is more obsessed with cute, cuddly and often zany promotional characters. Cities, towns and prefectures introduce them. So do companies, non-profit organizations and the national police. Sports teams, too.

Rarely, though, do such mascots enjoy the ubiquity of “Ren” and “G,” the two lion-like creatures conjured up to promote the Rugby World Cup opening in Tokyo on Friday.

On the one hand, this colorful pair with button noses and long, flowing manes, depict Japan’s softer side. On the other, their omnipresence around the nation speaks to Tokyo’s bigger ambitions as 500,000 foreign fans funnel into a historically insular nation.

Show me the yen

The focus these next two weeks is on the US$4 billion-plus windfall that visiting rugby enthusiasts are expected to pump into the economy. At least 1.8 million tickets have been sold.

The real question that the event camouflages, however, is Japan’s ability to harness this moment to achieve Prime Minister Shinzo Abe’s broader efforts to recalibrate national growth engines away from the traditional economic engine, exports.

The Rugby World Cup, Asia’s first, is a dress rehearsal for the 2020 Tokyo Olympics, which begins 308 days after Japan faces off with Russia today. It is also a dry run, of sorts, for Abe’s desire to raise Japan’s competitive game.

Over the last five years, Japan has enjoyed a tourism boom. In the first half of 2019, the country saw record inflows of nearly 17 million, up 4.6% from the previous year (also a record).

Some cities, in fact, already worry they’re being overwhelmed – including the nation’s flagship heritage destination, Kyoto. Concerns include traffic jams, overloaded train stations, litter, cultural differences – you name it. In June, the Japan Tourism Agency reported that more than 30% of cities face a shortage of accommodations and more than 38% suffer extreme traffic congestion.

And this is well before influxes of rugby fans and Olympic ticket holders.

This embarrassment of riches has many causes.

One is a 30% drop in the yen since 2012, which made Japan more affordable. Japan is as safe, efficient and clean a place as travelers will find. Prime Minister Abe’s team deserves credit for simplifying visa procedures. It rolled out a tax-free shopping infrastructure that is surprisingly unbureaucratic by Japanese standards.

Yet a few growing pains are getting in the way.

One is the mindset. Talking with executives and perusing survey data, one gets the distinct impression that much of Japan Inc. sees today’s tourism boom as transitory. Many figure that a yen surge, or the fickleness of consumer interest, might soon enough send tourists elsewhere.

This failure to commit means Japan has yet to tap the luxury travel market. Lots of inbound travel is related to tour packages that often reap bigger dividends in places where tourists are domiciled than Japan. Hence the determination by the Japan National Tourism Organization to address the “imbalance” between the number of arrivals and consumption.

High costs are still part of Japan’s challenge. Asian travelers account for 75% of arrivals, with an increasing number from Southeast Asia. China, too. But even with the weakened yen and disinflationary forces, lodging and transportation in Japan can be a big drawback for travelers, reducing cash left over to splurge on shopping and souvenirs.

In June, tourism research site Skift.com reported that Japan wants to increase visitor expenditures to about $74 billion annually by 2020 from about $42 billion in 2018. The latter figure is based on roughly 31.2 million arrivals. Japan is targeting 40 million next year.

The next month will be a vital testing ground.

Take Airbnb, an online marketplace with which Japan has had a schizophrenic relationship. A 2017 crackdown on home-sharing apps and services ended in mid-2018. It remains to be seen, though, how cultural mores collide with sharing-economy efficiencies.

Many neighborhoods and building associations are reluctant to allow locals to rent properties to foreigners on “security” grounds.

The force with local business groups, including hoteliers, remains strong. Just ask Uber and Lyft about their challenges cracking the Japan market. Yet these kinds of sharing apps are exactly the disruption needed as Abe seeks to slash Japan’s reliance on exports.

Perhaps the strongest headwind for services is Japan’s notoriously weak productivity. Since 2012, Abe has sought to reflate the economy with aggressive fiscal and monetary pump priming. At the same time, he did very little to reduce red tape or incentivize Japan Inc. to become more innovative and efficient.

This owes partly to a corporate welfare dynamic that Abe’s Liberal Democratic Party likes to downplay. Business lobbies and bureaucrats worry stronger productivity might necessitate mass layoffs, weakening the socioeconomic fabric. On Abe’s watch, Japan’s ranking in the World Bank’s ease-of-doing-business survey worsened markedly – to 39th in 2019 versus 20th in 2012.

Japan’s unique style of service is its own conundrum. It’s called omotenashi which the Japan National Tourist Organization defines as “the Japanese mindset of hospitality” with “an implicit understanding that there are no menial tasks if the result ensures a great experience for a guest.” It means adding more staff and more hours than needed – and that results in lower profit margins.

As Japan searches for a happy medium, the next two weeks of rugby matches seems an ideal moment for Japan to step out of its comfort zone. The short-term economic benefits are very welcome given the headlines zooming Japan’s way. Exports fell a ninth straight month in August – this time by 8.2% – thanks to the deepening global trade war.

The real payoff should come in the long run – and there’s some precedent worth considering.

The 2002 football World Cup, the first in Asia and held jointly with South Korea, vastly increased the amount of international signage on Japan’s streets, roads and in train stations. It also generated increased incentives for companies to add English-speaking staff.

That event – mascots galore, or course – catalyzed the growth of Asian sport, helping to create a multibillion-dollar market.

Might Japan 2019 have a similarly epochal influence on the region? That’s precisely what Abe’s Japan is going for. And there’s nothing cute about that.