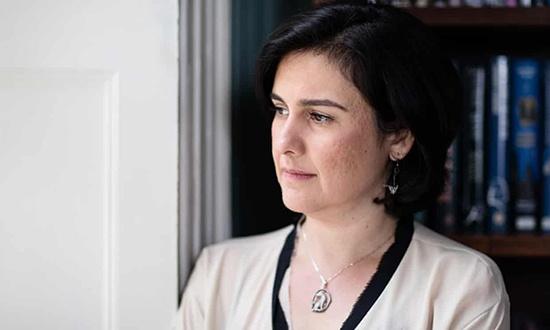 Nelly Sachs prize was given to Shamsie this month, but its German jury has reversed decision because of the novelist’s pro-Palestinian activism

‘The prize has chosen to withdraw the award from me on the basis of my support for a non-violent campaign’ … Kamila Shamsie. Photograph: Teri Pengilley/The Guardian

Kamila Shamsie has said that it is a “matter of outrage” that the Israel boycott campaign should be held up as something shameful after a German jury reversed its decision to award her the €15,000 (£13,000) Nelly Sachs prize over her support for the Boycott, Divestment, Sanctions (BDS) movement against Israel.

The eight-member jury had decided on 6 September to make the British-Pakistani author their latest winner, citing writing that “builds bridges between societies”. But when they learned of Shamsie’s support for the BDS movement, they announced that they would cancel their original vote and withdraw the award.

“With its vote for the British writer Kamila Shamsie … the jury honoured the author’s outstanding literary work,” they said. “At that time, despite prior research, the members of the jury were not aware that the author has been participating in the boycott measures against the Israeli government for its Palestinian policies since 2014.”

The prize, named for the German-Jewish Nobel laureate Nelly Sachs, is awarded by the German city of Dortmund to a writer promoting “tolerance and reconciliation” who has worked to improve cultural relations between people. Previous winners including Milan Kundera and Margaret Atwood. Its statutes stipulate that the life and work of an author should be included in the jury’s reasoning.

“Shamsie’s political positioning to actively participate in the cultural boycott as part of the BDS campaign a … is clearly in contradiction to the statutory objectives of the award,” said the jury. “The cultural boycott does not transcend borders, but affects the whole of Israeli society regardless of its actual political and cultural heterogeneity. Kamila Shamsie’s work is also withheld from the Israeli population in this way. This contrasts with the claim of the Nelly Sachs prize to proclaim and exemplify reconciliation among peoples and cultures. The jury regrets the situation in every respect.”

In May, the German parliament passed a motion labelling the BDS movement as antisemitic, calling it “reminiscent of the most terrible chapter in German history”. The motion was criticised by 60 Jewish and Israeli academics, who said in an open letter that it was part of a trend “labelling supporters of Palestinian human rights as antisemitic”.

Shamsie, who has put her name to the cultural boycott of Israel, said it was a matter of great sadness to her “that a jury should bow to pressure and withdraw a prize from a writer who is exercising her freedom of conscience and freedom of expression”.

She described it as a “matter of outrage that the BDS movement (modelled on the South African boycott) that campaigns against the government of Israel for its acts of discrimination and brutality against Palestinians should be held up as something shameful and unjust”.

“In the just-concluded Israeli elections, Benjamin Netanyahu announced plans to annex up to one third of the West Bank, in contravention of international law,” Shamsie said, “and his political opponent Benny Gantz’s objection to this was that Netanyahu had stolen his idea; this closely followed the killing of two Palestinian teenagers by Israeli forces – which was condemned as ‘appalling’ by the UN special coordinator for the Middle East peace process. In this political context, the jury has chosen to withdraw the award from me on the basis of my support for a non-violent campaign to bring pressure on the Israeli government.”

Shamsie, who won the Women’s prize for fiction last year, said the city of Dortmund had refused to publish her statement with their press release. She clarified that she will not allow her work to be published in Israel “on the basis that there is no Israeli publisher who is completely unentangled from the state … If a BDS-compliant Israeli publisher existed (as was formerly the case before the publishing house Andalus closed down) I would be happy to have them publish my work,” she said.

The novelist Ahdaf Soueif said the withdrawal of the award was “a manifestation of a new McCarthyism – on an international scale”.

“What we need to note, however, is that even in Germany there’s still a struggle going on,” Soueif said. “So it really is up to each individual and each organisation to choose whether they’re on the side of freedom of conscience and expression or on the side of a reactionary political censorship. Attempting to shut down a conversation on the issue of Palestinian political and human rights – an issue which so many have taken to their hearts – is simply not going to work.”

Jodie Ginsberg, chief executive of Index on Censorship, said that it was deeply disturbing that Shamsie had been stripped of the honour “for her personal opinions.

“An award meant to recognise a writer for ‘outstanding literary contributions to the promotion of understanding between peoples’ has been withdrawn because the writer personally supports a non-violent movement that is intended to focus attention on respect for universal human rights,” said Ginsberg.

“Increasingly we are seeing fiction writers being policed for their political opinions and books cancelled as a result. The result will be the very opposite of what the prize organisers seek to achieve: a narrowing of voices and therefore fewer opportunities to promote understanding between people.”