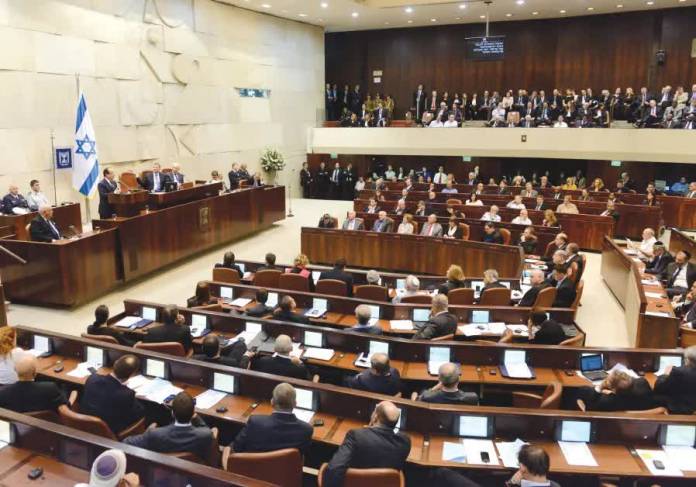 There are two paths forward…

There are two paths forward after this week’s inconclusive election: continued stalemate marked by more vicious political delegitimization, or a process of national political rejuvenation born of bare diplomatic and security necessity.

Here are 10 commandments for forming and running Israel’s next government along the latter, uplifting path.

• 1) PRESIDENT REUVEN Rivlin should force rotation in a coalition government on Benny Gantz and Benjamin Netanyahu. He must prevent a situation of “hanging chads” whereby any electoral determination is held up for months by legal wrangling (as with Bush v. Gore in 2000) or stymied by the intemperate vows to boycott one another, such as those which our politicians enunciated during the election campaign.
Rivlin will have to restrain himself and Gantz from acting out of a desire for revenge against Netanyahu. This should be possible. The ideological and political differences between Shimon Peres and Yitzhak Shamir were far greater than the gaps in policy that today separate Netanyahu and Gantz, yet Peres and Shamir jointly spearheaded a stable and successful unity government for four years, from 1984-1988.

• 2) Blue & White and Likud should exclude from their unity government Yisrael Beytenu and Democratic Union leaders (Avigdor Liberman, Ehud Barak and Stav Shaffir) who led the ugly anti-religious and anti-haredi (anti-ultra-Orthodox) discourse in recent months, and who took to methodically demonizing Netanyahu as a “traitor,” “fascist,” and “enemy of the people.” A government that seeks to heal divisions doesn’t need and shouldn’t include these zealots.
Liberman’s long list of stipulations for supporting a government is extremist and unattainable. He insists “without exception” on civil marriage, public transportation and store openings on Shabbat, core education and military conscription for the Ultra-Orthodox, and no Arab parties or ministers.

• 3) Ayelet Shaked of the New Right, who already has split from Yamina, should be welcomed immediately back into the Likud. Likud needs to begin preparing for the day after Netanyahu, whether that is four months or four years from now, and Shaked will prove a strong vote-getter and ideological trendsetter for the party.

• 4) The haredi parties will have to compromise with Netanyahu and Gantz on military draft legislation, especially if some of them want into the next coalition government as junior partners. Shas and Degel Hatorah were close to doing so last winter, but they found it hard to break from Agudat Yisrael’s radical stance on this matter, and Liberman decided to crash the government anyway for his own narrow purposes.

• 5) The government will have to drastically slash ministry budgets, raise taxes, and probably take on more debt in order to address the health system crisis, boost military spending, and handle an already ballooning budget deficit (over NIS 50 billion). Only a broad centrist government can make such difficult determinations, and it must do so by March 31 or the government automatically falls.

• 6) FACTUAL, DECENT debate – not political one-upmanship – must dominate when relating to complicated legislation on a host of issues, all of which will reach the Knesset again over the coming year. These include taxation of natural gas production, telecommunications and banking reform, housing policy, surrogacy, illegal immigration, conversion, pensions, settlements, commerce on Shabbat, court over-activism, illegal Bedouin and Arab building, deterrence against terrorists and their families, NGO financial transparency and more.
In recent times, every Netanyahu government initiative on these matters automatically became a “threat to liberal democracy” in the mouths of the opposition and was robotically, mindlessly opposed. That’s what happens when demonization displaces debate on the merits of a matter.

• 7) Israel must prepare simultaneously for a range of war scenarios. These include development of a credible capacity to strike Iranian nuclear targets, preparation for war on three fronts against an Iranian-led coalition, the ability to “mow the grass” in the two Palestinian arenas, and the ability to withstand an intense missile war. The highest priority is rebuilding IDF ground forces for swift maneuver into enemy territory (not relying on airpower alone). Another crushing strike against Hamas and Islamic Jihad in Gaza may soon be necessary.

• 8) In order to prevent the emergence of an Iranian war machine in Syria, enemy long-range missile infrastructure in Iraq and accurate missile stockpiles in Lebanon, Israel must continue to demonstrate military determination, including readiness for an overall confrontation with Iran. This has been Netanyahu’s bold approach, with American support and in delicate coordination with Russia, and it must continue.

• 9) The new government must embrace the incipient US peace plan, or at the very least express an enthusiastic willingness to engage on its basis. This is an opportunity not to be missed, since the Trump initiative will almost-certainly sideline the stale, unworkable “internationally-recognized parameters” for solution of the Israeli-Palestinian conflict. Israel also must be ready for a deterioration of security if Palestinian leadership violently rejects the American initiative.
Again, a broad government is necessary to manage this sensitive security and diplomatic dance, to reject pressures for Israeli unilateral withdrawals, and to take advantage of the opportunities for unilateral Israeli sovereign action that may emerge (particularly in the Jordan Valley and Jerusalem envelope).

• 10) The new government should move quickly to bolster the Zionist majority in Jerusalem by building in the E-1 quadrant and linking the city to Ma’aleh Adumim. It should take resolute action against radical and foreign elements that are undermining Israel’s sovereignty in the eastern parts of the city and on the Temple Mount. Jerusalem is the classic consensus issue in Israeli society, and it needs urgent attention.

The writer is vice president of the Jerusalem Institute for Strategy and Security, jiss.org.il. His personal site is davidmweinberg.com.