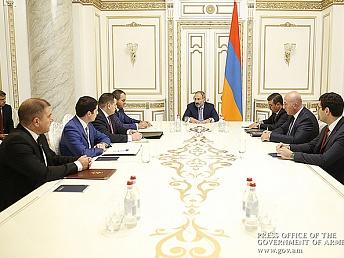 “I consider this extremely important not only in terms of revealing previously committed crimes of corruption nature . I am just sure that if we are not principled in this matter, then corruption will find how to adapt to new conditions,” he said.

Prime Minister expressed hope that the results of today’s discussions will ensure the full-fledged interaction of the law enforcement bodies, “since during this period some problems arose in this area.” At the same time, the head of government noted the importance of restoring damage to the state and people as part of the fight against corruption.

“Of course, approximately 51 billion drams have already been restored over the last 17 months. This is basically not a small amount, but, in fact, the information that we have gives us reason to say that in fact there’s a lot more work to be done,” he said. In addition, according to Pashinyan, another important area in the fight against corruption is the need to establish order.

“Since I know that there will be accompanying comments, our actions should not be perceived in any way as a process of repression. It is also very important. The whole process should be organized in such a way so that not only do not harm the image of Armenia in any way of a democratic and legal state, but vice versa – every such action and every movement in this direction should further strengthen the image of our country,” the prime minister said. ($1 – 476.13 drams). -0-