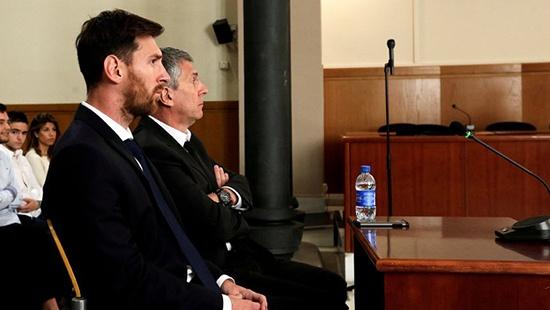 By Rafael Buschmann and Michael Wulzinger

The London-based company Sidefloor was part of the tax-evasion structure for which Lionel Messi and his father Jorge were convicted. Now it has been revealed that FC Barcelona spent years paying agent fees to this letterbox company, payments apparently destined for Jorge Messi.

Spring 2016 saw the beginning of an audit at FC Barcelona. Four officers belonging to the large-company division of Agencia Tributaria, the Spanish tax authority, had stumbled across multi-million-euro payments from the football club to Lionel Messi’s charitable foundation.

As documents from the whistleblower platform Football Leaks show, the inspectors demanded that the club supply all documents pertaining to payments to Fundación Leo Messi, which prides itself on assisting needy children, from the years 2010 to 2013. The auditors wanted precise information that could shed light on why Barcelona had made the payments.

In addition, the tax officials hoped to learn more about payments made to the agents representing Barcelona players. Pressured by the Agencia Tributaria, FC Barcelona executives reconstructed all payments made by the club during the preceding seven years to agents working on behalf of Lionel Messi.

It was a sensitive undertaking, in part because the audit of FC Barcelona was taking place at a time when Lionel Messi and his father Jorge were being charged on suspicions of tax evasion and abetting tax evasion. The trial began a short time later, with a regional court in Barcelona ultimately sentencing the player to a 21-month suspended prison sentence. His father initially received the same term.

The judges were convinced that between 2007 and 2009, Lionel and Jorge Messi had hidden more than 10 million euros in marketing revenues from the Spanish tax office “with the help of a strategy” involvingshell companies based in tax havens, ultimately cheating the state out of 4.1 million euros in tax revenues. In May 2017, the highest Spanish court reduced Jorge Messi’s sentence to 15 months, but the upshot was that both he and his son Lionel now had prior convictions. Any additional tax-related missteps could prove dangerous.

One of the letterbox companies in the Messis’ tax-evasion network bore the name Sidefloor Limited. Based in London, it took care of marketing contracts for Lionel Messi and earned a commission of between 5 and 8 percent for doing so. The director of Sidefloor was the Briton David Waygood, who also headed up more than 100 additional companies.

Sidefloor Limited suddenly made a reappearance thanks to the audit of FC Barcelona in spring 2016. Documents from Football Leaks show that the club made 13 Lionel Messi-related payments in the period from June 2009 to June 2014, adding up to precisely 6,695,005 euros. According to the documentation, Barcelona made the payments to Sidefloor in London’s Bedford Row, the exact same company that the Spanish judges ruled to be an important part of the Messis’ offshore system.

These payments raise several questions. Was much of the 6.7 million euros paid to Sidefloor transferred onward to Jorge Messi for his work as an agent? And if so, did Jorge Messi reveal these payments to the tax authorities? It is enough to arouse suspicions that Sidefloor was used — just as it was for Messi’s marketing revenues — to obscure the true recipient of the agent fees.

Only since 2015 has Jorge Messi had FC Barcelona pay his fees to a company, of which he is the director. The company is called Limecu, the name a fusion of the first letters of the player’s full name: Lionel Messi Cuccittini. Documents show that between October 2015 and June 2016, when the audit took place, Barcelona wired 3,788,000 euros to the company, which is based in the Messis’ hometown of Rosario, Argentina.

From a formally legal perspective, everything seemed to be on the up-and-up when it came to the agent fees paid to Sidefloor, with the London-based company being named as FC Barcelona’s contractual partner for the Messi-related payments until mid-2014. The club and Sidefloor, represented by director Waygood, had apparently agreed to an agent contract on Oct. 10, 2008. Just a few months before that, on July 4, Lionel Messi had extended his contract to the end of 2014 — “with the help of Jorge Messi,” as is noted in a draft of the agent contract. According to the draft contract, FC Barcelona was to pay Sidefloor a provision of 400,000 euros each year for as long as Lionel Messi played for the club, “plus a sum equal to 5 percent of the bonuses the player receives.”

This 5-percent deal for Sidefloor was apparently still valid on Feb. 7, 2013, when Lionel Messi again extended his contract with the club, this time until the end of June 2017. The player’s income increased significantly, with his annual salary now at 18.6 million euros. His bonuses also skyrocketed.

Little More than a Strawman

And Sidefloor was still to receive its 5 percent. Director Waygood signed Lionel Messi’s new contract as an “agent.” Jorge Messi also affixed his signature to the document. Interestingly, FC Barcelona misspelled Waygood’s name at the spot where the Englishman was to sign, writing “Waygoog” instead. The error would be repeated in a different document. But nobody seemed particularly bothered. After all, Waygood was likely intended as little more than a strawman.

On that Feb.7, 2013, when Lionel Messi once again extended his contract with FC Barcelona, the football club and Sidefloor director Waygood apparently signed an additional deal, a “service contract.” DER SPIEGEL has obtained a draft of that contract, according to which Barcelona was to begin making annual payments to the London-based letterbox company of 280,000 euros, payable in two installments, for “talent scouting in Argentina.” When an FC Barcelona staffer ran across these payments in July 2016 in connection with the audit, he wrote an email to the club’s chief legal representative and to Jorge Messi’s lawyer: “There are a couple of invoices pertaining to services that we have discovered. I have attached them to this message.”

Whether and how Sidefloor transferred the agent fees from FC Barcelona onward to Jorge Messi is not apparent from the Football Leaks documents. But it is possible that the shell company functioned here too merely as a way station to obscure money flows.

The choice of bank is a potential indicator: a Luxembourg branch of the Andorran financial institution Andbanc, traditionally one of Europe’s most secretive financial centers. Nothing would have been easier for Sidefloor than to send the money onward to a company under the control of Jorge Messi without having to face any uncomfortable questions.

Among the Football Leaks documents, there is a draft of an agreement from July 2013 between the club, Lionel Messi and Sidefloor according to which the superstar would be prematurely extending his contract that had just been extended to June 2017 by an additional year. For FC Barcelona, the club’s then president, Sandro Rosell, was to sign the deal while director Waygood, identified as “agent” in the draft contract, would be signing on behalf of Sidefloor.

Just one year later, Messi’s salary was to see yet another massive increase, at least according to a draft contract dated May 14, 2014. This deal was to be signed by the new president of FC Barcelona, Josep Maria Bartomeu, Lionel Messi himself and, again, Waygood as “agent.” Yet even as FC Barcelona composed the two new draft contracts, again misspelling the agent’s name as Waygoog, the Messi family’s strawman was no longer among the living. David Waygood had thrown himself in front of a train on April 27, 2013, not far from his home in the county of Kent.

At the time of his death, the British regulator Financial Conduct Authority was apparently preparing to investigate a company under Waygood’s control. Officials determined that “work-related stress” contributed to the suicide. It is impossible to say whether a role was played by the investigation being conducted by Barcelona prosecutors into potential tax evasion and abetting tax evasion by the Messis and their connection to the shell company Sidefloor.

A neighbor who lived two doors down from Waygood and who claims to have been friends with him merely told DER SPIEGEL that it was ultimately all too much for him. Waygood left behind two grown children, neither of whom responded to a request for comment. Neither FC Barcelona nor Jorge Messi commented on the payments made to Sidefloor. David Waygood’s successor as Sidefloor director likewise did not respond to a DER SPIEGEL inquiry.

This article is an excerpt from a new book based on data from the whistleblower platform Football Leaks. The book, “Football Leaks II: Neue Enthüllungen aus der Welt des Profifußballs,” appeared in German on Monday, September 9.