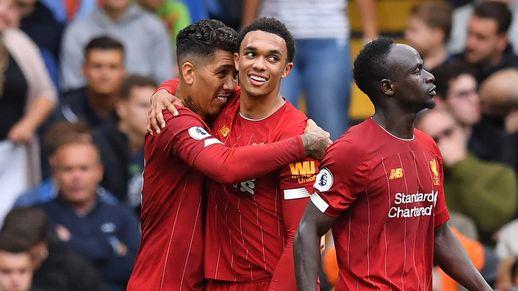 Liverpool were pushed all the way by Chelsea at Stamford Bridge, and had to hang on in the end to make it six wins in a row with a 2-1 success.

Trent Alexander-Arnold and Roberto Firmino grabbed the first half goals, either side of Chelsea having a goal ruled out by VAR, before the excellent N’Golo Kante pulled one back in the second half to set up a frantic finish.

Liverpool missed chances to kill the game off, while Chelsea missed a couple of opportunities to secure a point in what was a fascinating contest – with Frank Lampard’s men finishing the stronger and forcing the European champions to hang on in the end.

Jurgen Klopp’s side restored their five-point lead at the top of the Premier League after a sixth straight win of the season, and 15th overall in their magnificent run, while Chelsea were applauded off by the home crowd after putting up a hugely promising performance – especially the magnificent Kante in his first game back from injury.

After a lively start from both sides, Alexander-Arnold gave Liverpool the lead on 14 minutes with a piece of quick-thinking was followed by a ferocious shot that flew into the top corner.

Mohamed Salah shaped up to take the free kick just outside the box, but instead back-heeled the ball to the Reds right back who lashed his shot beyond the helpless Kepa.

Chelsea looked to have levelled through skipper Cesar Azpilicueta after some pinball in the Liverpool box, but it was chalked off by the VAR as mason Mount was narrowly offside in the build-up.

The anger of the Chelsea fans intensified just three minutes let when Firmino doubled Liverpool’s lead when he had a free header to nod in Andy Robertson’s cross.

Liverpool came out quicker in the second half and had a couple of chances to kill the game off through Salah, while Firmino had a back-post volley superbly turned away by Kepa.

Adrian also made a good save at the other end, but could do nothing about Kante’s brilliant effort, as the midfielder went on a scamper right through the heart of Liverpool’s defence before firing an unstoppable effort right into the top corner.

Mount missed a glorious chance late on as Chelsea pushed for an equaliser, but Liverpool managed to hold on to make it six wins out of six and 15 Premier League wins in a row for Klopp’s side.