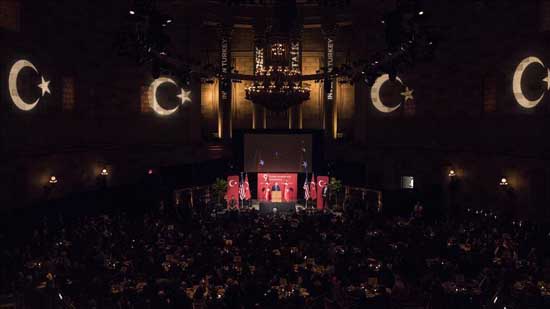 The Turkish-American Business Council (TAİK) will present its road map to increase trade volume to $100 billion at an event this week in New York which will be attended by President Recep Tayyip Erdoğan.

While serious political strains overshadow bilateral relations, such as the creation of a safe zone in Syria and Turkey’s purchase of Russian S- 400 missiles, increasing the current trade volume to fivefold remains the principle positive agenda item which helps dissipating the cool political weather between the two capitals.

The tenth Turkey Investment Conference has been scheduled to take place during the week of the United Nations General Assembly, on the margin of which Erdoğan is expected to meet U.S. President Donald Trump.

Last spring TAİK initiated work to meet the $100 billion target which has later included the Trade Ministry and other representatives of the business community. The result of this work had been presented to U.S. Secretary of Commerce Wilbur Ross who visited Turkey at the beginning of the month.

“We took on the mission of reaching the target and came up with a road map,” said Mehmet Ali Yalçındağ, the president of TAİK, ahead of the event in New York. “Time is our enemy,” Ross told TAİK members when he met them in Turkey, according to Yalçındağ.

“We are racing against time. We are going together with 20-30 companies representing selective sectors to New York where they will hold their first meetings with America’s retail giants,” said Yalçındağ.

Turkey aims to increase its exports to the U.S. to $50 billion, which will open room for serious growth for especially sectoral leaders as well as small and medium-size enterprises, according to Yalçındağ.

While the possibility that Turkey can face sanctions due to the purchase of Russian missiles stands as an obstacle to increase bilateral trade, Ankara has left the door open to purchase American Patriots if its conditions are met.