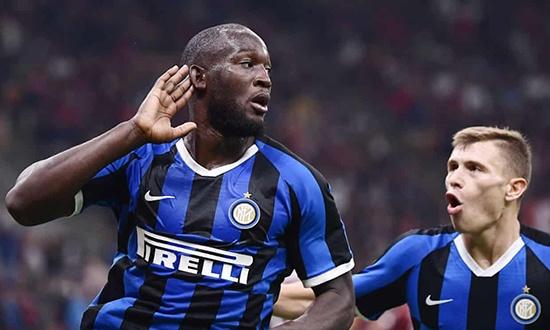 Romelu Lukaku cups his ear to the crowd after scoring Inter’s second goal against Milan in the derby. Photograph: Marco Bertorello/AFP/Getty Images

Romelu Lukaku’s second-half header stretched Internazionale’s perfect start to the Serie A season to four games as they took the derby spoils against Milan. Lukaku headed home a cross from Nicolò Barella in the 78th minute to add to Marcelo Brozovic’s deflected opener.

Lautaro Martínez also had an effort ruled out after a VAR review as Antonio Conte’s side proved good value for a win which takes them back to the top of the table. Despite their strong domestic start, Inter went into the game under a degree of pressure after needing a late Barella strike to salvage a Champions League draw at home to Slavia Prague in midweek.

Their 49th-minute opener had an air of good fortune about it as Brozovic’s free-kick deflected into the net off the Milan wall. But it sparked a renewed period of domination by Inter, with both Brozovic and Martínez bringing saves out of the excellent Gianluigi Donnarumma in the Milan goal.

Inter’s second arrived in the 78th minute when Lukaku, who had struggled to make much of an impression, pounced to extend his side’s lead. Lukaku turned provider to set up the substitute Matteo Politano with a good chance in the 80th minute, but he rattled the bar with a rising shot.

Aaron Ramsey scored on his first start for Juventus to send the Serie A champions on their way to a 2-1 win over Hellas Verona amid a strained atmosphere at the Allianz Stadium. The former Arsenal midfielder’s goal cancelled out Miguel Veloso’s opener for the newly promoted visitors, who also missed a penalty.

There was a small protest outside the stadium before the match in support of the 12 hardcore Juventus “ultra” fan leaders who were arrested on Monday after allegedly making illegal demands to the club to obtain more tickets. A group of around 20 fans chanted for their release while others handed out leaflets. There were also no flags or banners displayed in the Curva Sud, from where the ultras normally watch the match.

In the Bundesliga Philippe Coutinho scored his first goal for Bayern Munich and Robert Lewandowski kept his scoring run going in the champions’ 4-0 win over 10-man Cologne.

Lewandowski grabbed the first two goals in the third and 48th minutes to take his league-leading tally to nine in five games. The visitors played the last half-hour with 10 men after Kingsley Ehizibue was sent off for bringing down Coutinho just as the Brazilian was set to score in the 59th.

Coutinho dusted himself off to score cheekily from the penalty spot, but had to do it again as too many players had encroached in the area while he was taking it. He did not delay at the second asking and scored for the first time since joining on loan from Barcelona. Coutinho then set up Ivan Perisic in the 73rd minute.

Bayern Munich briefly went top of the table with that win, before Leipzig claimed three points at Werder Bremen with a 3-0 victory. Leipzig’s cause was made easier when Konrad Laimer was sent off at 64 minutes.

Javairô Dilrosun scored a superb solo goal as Hertha Berlin defeated Paderborn 2-1 for their first win of the season. The Dutch winger said he did not know how many defenders he passed before opening the scoring in the 10th minute. “I’ll have to look at the replay,” Dilrosun said.

Union Berlin lost 2-0 at Bayer Leverkusen, while Augsburg salvaged a 1-1 draw at Freiburg.

Marseille missed the chance to go top of Ligue 1 as their 1-1 home draw with Montpellier ended with three players sent off after a stoppage-time bust-up. Valère Germain’s second-half equaliser rescued Marseille a point after Andy Delort had given Montpellier an early lead, but the draw was not enough for them to leapfrog leaders Paris St Germain.

Marseille defender Boubacar Kamara and Montpellier midfielder Jordan Ferri were both shown red cards for their part in a late fracas and the home side were later reduced to nine men when Dimitri Payet was sent off for dissent after being booked.

Elsewhere in Ligue 1, second-placed Nice bounced back from last week’s defeat at Montpellier by coming from behind to win 2-1 at home against Dijon, and Monaco’s winless start was extended to six matches after they were held to a goalless draw at Reims.