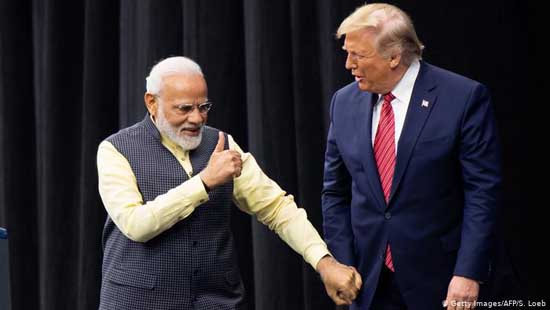 Over 50,000 people showed up for the ‘Howdy, Modi’ event in Houston, Texas, giving India’s PM a rock star-level welcome. President Donald Trump joined him on stage as the two leaders lauded US-India ties.

The massive rally, held at Houston’s NRG Football Stadium, launched some 90-minute music and dance show featuring around 400 artists entertained the audience who gathered hours in advance.  People were chanting Indian Prime Minister Narendra Modi’s name long before he appeared in a welcome for a foreign leader rarely seen on the American soil.

The spectacle was both campaign event for Trump and the show of the “strategic partnership between the world’s oldest and largest democracies,” as the White House put it. Although it comes amid ongoing trade disputes between the two nations, the tensions were not reflected in the speeches that lauded strong ties and friendship, receiving ovations from the audience.

“India has a true friend in the White House,” Modi said. “Friends, as I told you, we have met a few times and every time he has been the same: warm, friendly, accessible, energetic and full of wit.”

And Trump confirmed that.

“You [India] have never had a better friend as President as President Donald Trump,” he said. “Under PM Modi’s leadership, the world is witnessing a strong, sovereign republic of India.”

All in all, Trump gave his typical election campaign-style speech focusing on border security and dealing with illegal immigration, both hot issues for Texas, but added some Indian twist to it.

“Both India and US also understand that to keep our communities safe, we must protect our borders,” Trump said. The US president also talked about NBA coming to India and Delhi planning to buy American liquefied natural gas.

Trump did not miss the chance to woo the Indian American voters who predominantly preferred Hillary Clinton over him in 2016.

Modi’s visit has indeed became the backdrop for one of the largest-ether LNG deals the US has ever made. India’s Petronet LNG is investing $2.5 billion into Tellurian gas company in exchange for 5 million metric tons of LNG per year over the lifespan of the project.

While the deal has been described as a “win-win” for both parties, New Delhi and Washington are still experiencing tensions in the trade field. Back in June, the US terminated trade concessions for India as a developing country, citing lack of reciprocal market access for the American companies. The move has closed the door for up to $5.6 billion worth of annual exports from India to the United States. New Delhi has been trying to challenge the decision, yet to no avail so far.