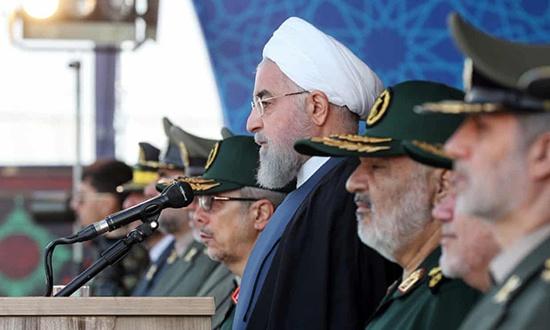 Iran’s president, Hassan Rouhani, has said he will present a plan for Gulf security at this week’s UN general assembly, as Washington and Tehran fight for diplomatic advantage in the wake of the devastating attack on the Saudi oil industry.

Rouhani made clear the Iranian proposal, dubbed the ‘Coalition of Hope’, was designed to exclude the US, which would make it unpalatable to Gulf states who see Washington as an ally and protector.

Iran’s foreign minister, Mohammad Javad Zarif, later said that opposition to foreign forces in the Gulf was not a precondition for joining the coalition, and that all the permanent members of the UN security council were welcome to take part.

Iran’s scheme is seen at the UN an attempt for the diplomatic high ground, at a time when the US and Saudi Arabia blame the country for the 14 September air strikes on Saudi oil fields, and the Gulf appears on the brink of a major conflict.

“The security of the Persian Gulf, the strait of Hormuz, and the Sea of Oman is indigenous,” President Rouhani said at an extensive military parade marking the 39th anniversary of the Iran-Iraq war. “Foreign forces could cause problems and insecurity for our nation and region,” he added.

In a move likely aimed at easing pressure on Iran ahead of Rouhani’s general assembly speech on Wednesday, a maritime official was quoted in the Iranian press as saying that a British-flagged oil tanker, the Stena Impero, seized by Iran more than two months ago, would soon be allowed to set sail from the port of Bandar Abbas.

Asked about Rouhani’s plan on Sunday, Trump said he was open to hearing it. “I’m always open,” he said. “We’re doing our own thing with Iran,” the president added, and claimed “tremendous progress” has been made. He has sought to play down the attacks on Saudi oil installations, claiming that the US is no longer dependent on oil from the Gulf.

World leaders converge on New York for the annual general assembly summit this week at a time of deep discord. While most heads of state and government will take part in a summit on the climate emergency on Monday, Trump will deliver a speech on religious freedom at the same time in the UN complex, attacking US adversaries for their records on the issue.

There will be rival delegations from Venezuela, each backed by different permanent members of the UN security council, which is also split over the conflicts in Syria and Yemen. But it will be the risk of a new war in the Gulf that will hang most heavily over the summit.

The French foreign minister Jean Yves Le Drian said the coming week at the general assembly would will reveal whether it is possible to continue on the path of de-escalation with Iran,

But he admitted the scope of attack on the Saudi Arabian oil facilities represented a game changer, reducing the parameters for diplomacy and making the space for negotiations more limited.

“The strikes took place when we felt there was a space open for discussion”, he lamented at a press conference.

UN inspectors are in Saudi Arabia to examine weapons fragments and other evidence from the attacks, which temporarily knocked out half of the kingdom’s oil production.

Iran has said the strikes were launched from Yemen by its allies, the Houthi rebels, who formally claimed responsibility. The Wall Street Journal reported on Sunday that Houthi officials had warned diplomats that Iran was putting them under pressure to take part in a second wave of attacks.

At the same time, the Houthis have offered a ceasefire to Saudi-backed Yemeni government. The offer was welcomed by the UN special envoy on Yemen, Martin Griffiths, who said that its implementation “in good faith could send a powerful message of the will to end the war”.

Saudi Arabia, which leads a coalition of Gulf monarchies fighting in Yemen, gave a cautious response. Its foreign minister, Adel al-Jubeir said: “We judge other parties by their deeds, actions and not by their words, so we will see [whether] they actually do this or not.”

On the air attacks on a Saudi oil field and refinery, Jubeir said: “It was done with Iranian weapons, therefore we hold Iran accountable for this attack.”

He added that Riyadh would not give its full response until after the UN investigation was completed.

“The kingdom will take the appropriate measures based on the results of the investigation, to ensure its security and stability.”

Iran’s foreign minister, Mohammad Javad Zarif, said Iran would not necessarily accept the results of a UN investigation, calling into question its impartiality.

“I cannot say a priori that the people who are being sent will conduct an impartial investigation because we’ve had cases in the past where they didn’t,” Zarif told a CBS News programme, Face the Nation.

In comments to journalists in New York on Sunday, Zarif said that Trump’s designation of Iran’s central bank on Friday as being linked to terrorism had cut off any remaining hope of resuming US-Iran negotiations. He said the decision removed a loophole by which the central bank could finance food and medicine purchases, and because it made it very difficult for Trump or any future president to reverse.

“President Trump knowingly or unknowingly on Friday closed the door to negotiations, Zarif said. “Because if he cannot remove the central bank from that designation, then there wont be any normalisation of economic activity. So he doesn’t have anything to offer to us to sit at the negotiating table.”

The US has made clear its own initial response will be diplomatic, but it has moved more military hardware to the region. A destroyer, the USS Nitze, has reportedly arrived at the northern end of the Gulf, as part of a range of deployments aimed at shoring up Saudi defences.

On Sunday the US secretary of state, Mike Pompeo, repeated the administration’s intention to lead with diplomacy. “Apparently the Iranians are bloodthirsty and looking for war. president Trump and I, we’re looking for a diplomatic resolution to this,” he told CBS.

In a separate interview with ABC News, Pompeo said that if diplomacy failed, he thought the whole world new, including Iran, “of American military might”.