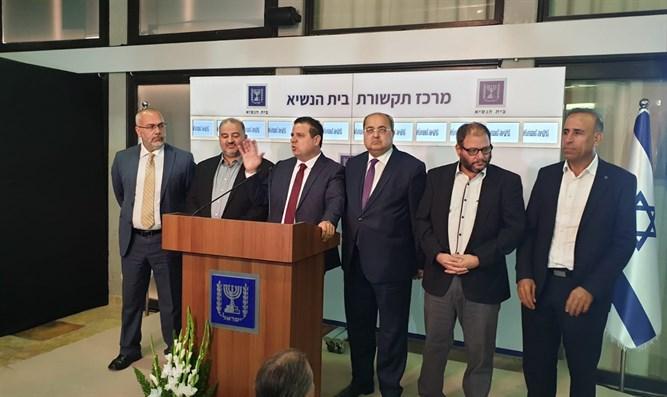 Three of the four factions in the predominantly Arab Joint List party endorsed Blue and White chief Benny Gantz for Prime Minister Sunday, while the fourth faction is withholding its endorsement, the party wrote in a letter to President Reuven Rivlin.

A delegation of Joint List MKs met with President Rivlin Sunday for consultations on the nominating of a candidate for the premiership.

After a general election, the President meets with party leaders to see which candidate for the premiership has the best chance of forming a government, before tasking that candidate with creating a coalition.

Following a vote within the party earlier on Sunday, the Joint List delegation told the President that they were recommending Gantz for Prime Minister.

The delegation included MKs from the three factions which had agreed to endorse Gantz – Hadash, the United Arab List (Ra’am), and Ta’al – while the Arab nationalist Balad party did not send a delegate, and no distinction was made during the consultations between the positions of the factions, with the delegation giving a blanket endorsement on behalf of all 13 MKs-elect.

Later, however, the Joint List penned a letter to the President clarifying that the endorsement of Benny Gantz only came from the 10 MKs representing the Hadash, UAL, and Ta’al factions, while the Balad faction’s three MKs would not recommend either Gantz or Netanyahu for premier.

That leaves Gantz with only 54 recommendations, after Labor and the Democratic Union formally endorse him Monday, while Netanyahu is expected to net 55 recommendations.

Officials in the Blue and White party had reportedly hoped that Balad’s MKs would be stricken from the recommendation count, with the aim of forcing Netanyahu to be the first candidate tasked with forming a new government.

With no clear path to a 61-seat majority without Blue and White, and the center-left party unwilling to form a unity government with Netanyahu at the helm, Blue and White officials hope to receive the mandate for forming a government after Netanyahu, thus enabling them to pressure potential coalition partners with the prospect of a third round of elections, should they refuse to join a Gantz-led government.