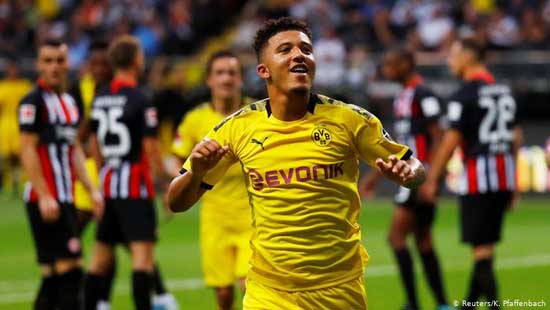 The English teenager struck again against a stubborn Eintracht Frankfurt on matchday five. Sancho always had the skill, but has now added an end product which could prove vital in the title race.

The best players don’t just score goals, they score the goals that matter. Jadon Sancho’s second-half strike against Eintracht Frankfurt on Sunday, one which gave his side a 2-1 lead, was yet more evidence that we’re witnessing the evolution of something very special in Dortmund. Had his team matched his play, then Sancho’s goal would have been the winner and not just Dortmund’s second in a 2-2 draw.
That Eintracht’s late equalizer arrived just a few minutes after Sancho was withdrawn was no surprise. Sancho had offered Dortmund a tireless outlet for 73 minutes, easing pressure on a defense beginning to wilt.
The 19-year-old had played every minute of Dortmund’s season until that point. Now a crucial weapon in the Dortmund arsenal, it seems odd to think, just twelve months ago, he was a bit part player; a youngster still finding his feet at this level.

He’s certainly found them now. In a Dortmund squad top-heavy, there’s a strong case to be made that only Sancho – along with captain Marco Reus – is a nailed-on starter. The arrivals of Julian Brandt and Thorgan Hazard were meant as no threat but there must have been concern that his playing time might have dipped. It hasn’t. The former Manchester City prospect is undroppable and it’s the new arrivals who have been rotated thus far.
Not even Brandt or Hazard could argue with that approach either. Sancho’s blistering form from last season – he scored 12 goals and set-up 17 – has continued into this. He has two goals and five assists in five games. His goals have been crucial, too, the first an equalizer against Cologne which set his team on the road to a 3-1 win. The second really should have been enough to sink Eintracht.
He now has 17 goals and 29 assists in 62 appearances for the club he joined two years ago for an €8m ($8.8m) compensation fee. Dortmund will be all too aware of how stratospheric those numbers could climb should he commit to staying beyond his current three-year deal. That must be a priority.
For now, Sancho’s end product is capable of being the difference in this title race. But only if the defense can match his performances.
DW