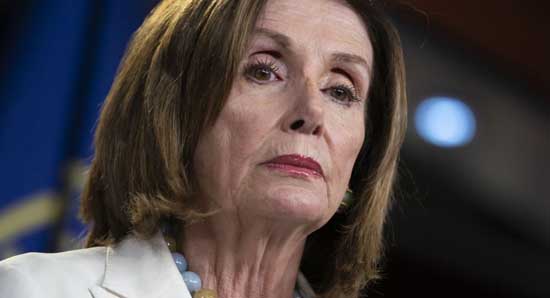 Speaker Nancy Pelosi wrote in a letter to Congress on Sunday that the previously reported whistleblower complaint over President Trump’s call with a foreign leader “must be addressed immediately.”

“This violation is about our national security. The Inspector General determined that the matter is ‘urgent’ and therefore we face an emergency that must be addressed immediately,” Pelosi said.

The Speaker also called on congressional Republicans “to join us” in asking the acting director of national intelligence to “obey the law as we seek the truth to protect the American people and our Constitution.”

“If the Administration persists in blocking this whistleblower from disclosing to Congress a serious possible breach of constitutional duties by the president, they will be entering a grave new chapter of lawlessness which will take us into a whole new stage of investigation,” the letter reads.

Friday evening, the Washington Post reported that the conversation was the subject of an undisclosed whistleblower complaint filed last month by an unnamed US intelligence official alleging Trump made an inappropriate promise to a foreign leader. Another report by The Wall Street Journal suggested that Trump had urged Ukrainian President Zelensky to investigate Hunter Biden, the former vice president’s son. According to the report, Trump wanted to probe whether the corruption allegations against Hunter, who was on the board of directors of a large Ukrainian oil company, were true. The Trump administration has blocked Congressional from viewing the complaint, and Trump said on Friday it was “just another political hack job.”

The US President took the matter to his Twitter account on Sunday, writing that the whistleblower didn’t have “a first hand account of what was said.” He outlined that the Ukrainian government didn’t experience any pressure, referring to an earlier statement by Ukrainian Foreign Minister Vadym Prystaiko.