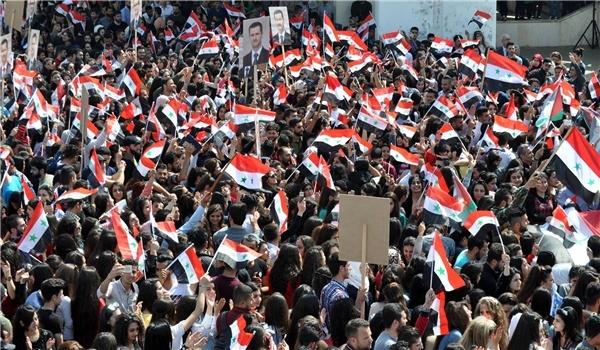 TEHRAN (FNA)- Residents of Eastern Syria are infuriated at a new agreement between Washington and Ankara on the establishment of a safe zone in Northern Syria as popular unrests against the presence of foreign occupying forces have increased, the Arabic-language media outlets said.

The Beirut-based al-Akhbar newspaper reported that many residents of Syria’s regions bordering Turkey have started voicing stonrg protest against the creation of a safe region by the US and Turkey in Northeastern Syria.

The daily pointed to the Syrian people’s concern over the likely occupation of these regions by the Turkish Army and its allied militants in Northeastern Syria, including Afrin (in Aleppo province).

Al-Akhbar also pointed to Ankara’s new threats to implement military operations in Northeastern Syria in case the safe zone agreement is not implemented.

Meantime, the residents of the city of Aleppo staged massive rallies against the meddling by the US and Turkey in Syria’s internal affairs, and called for exit of occupying forces from Syria.

In a relevant development earlier in September, a Russian expert said that the US is deceiving Turkey on the creation of a safe region in Northeastern Syria.

“Washington will continue to tell lies to Turkey on setting up a demilitarized zone in Northeastern Syria, and it will keep on delaying the issue of a safe zone there,” the Russia Today television network quoted a Russian Expert at Eastern Studies Institute of Russia Amour Jadjif as saying.

He noted that holding joint patrols with the US is not an achievement for Turkey as far as setting up a safe zone is concerned since these patrols are only conducted in some regions.

“Turkey’s policy vis-a-vis the Syrian refugees and its efforts to use them as a leverage against the US will not work and only raise concerns among the EU member-states,” the Russian expert added.

Turkish President Recep Tayyip Erdogan has recently claimed that Ankara is determined to create a safe zone in Eastern Euphrates and Northern Syria in September.

The Turkish Army occupying forces have also crossed borders with Syria and arrived in Eastern part of the border town of Tal Abyaz in Northern Raqqa by using crossing of al-Izzawi town and on the pretext of conducting joint patrol with the US occupying forces.

In another relevant development also in September, the Arabic-language media outlets said that the Turkish government has called for extending the ceasefire until the upcoming Ankara-Moscow-Tehran summit despite the lack of commitment show by Turkey to its pledges to drive back terrorist groups from the demilitarized zone.

The Arabic-language Al-Watan newspaper quoted a battlefield source as saying that the terrorist groups, including Tahrir al-Sham al-Hay’at (the Levant Liberation Board or the Al-Nusra Front), have not retreated from the demilitarized zone and continue violating the ceasefire despite the pledges given by Turkey to Russia and end of an eight-day deadline.

It pointed to Tahrir al-Sham’s reinforcement of its military positions in the surroundings of the city of Ma’aret al-Numan and the nearby towns and villages in Southern and Southeastern Idlib, and said that the terrorist groups are preparing themselves for an upcoming battle as the ceasefire would end.

Meantime, sources close to Ankara-backed National Liberation Front (NFL) terrorist group said that the Turkish Army officers in a meeting with terrorist commanders have informed them that Ankara has asked the ceasefire to be extended until the upcoming trilateral summit between Iran, Russia and Turkey later in September.

Despite the failure to remain committed to the implementation of the Sochi agreement, including its pledges to dissolve Tahrir al-Sham in the demilitarized zone, Ankara is trying to reinstate a permanent ceasefire there.