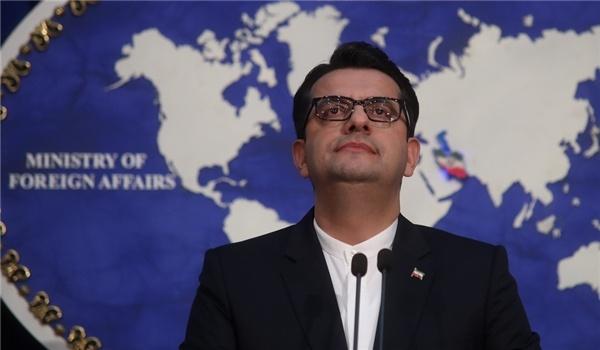 In a statement on Saturday, Mousavi voiced regret that the Saudi government, “with the illusion of an Iranian animosity”, and “by evading the existing realities” was constantly trying to distract from its own failures by pinning the blame on Iran.

Mousavi then advised the Saudi government to stop leveling baseless accusations on others, and instead put an immediate end to the war in Yemen that has brought the kingdom nothing but the death of many innocents and destruction of Yemen since the Saudi-led, US-backed coalition started the war there in 2015.

The Yemeni Ansarullah movement conducted a large-scale operation against Saudi Arabia’s Aramco oil installations last Saturday, in response to the Saudi-led war on their country.

Although the movement immediately took credit for the attacks, US Secretary of State Mike Pompeo swiftly accused Iran of being behind the assault, without providing any evidence. Tehran categorically rejected the allegations.

Meanwhile, Saudi Arabia claimed on Wednesday that the strikes on its oil infrastructure came from the “North” and were “unquestionably” sponsored by Iran, adding that the Houthis were not responsible for the assault despite claiming it.

Earlier on Saturday, Iranian Foreign Minister Mohammad Javad Zarif referred to Riyadh’s attacks against al Hudaydah port in retaliation for last week operation of Yemenis against Saudi kingdom’s oil installations as a clear sign that even the KSA itself does not believe in its self-concocted fiction of Tehran’s involvement in the attacks.

“Since the Saudi regime has blamed Iran—baseless as that is—for the attacks on its oil facilities, curious that they retaliated against Hudaydah in Yemen today—breaking a UN ceasefire,” Zarif tweeted.

“It is clear that even the Saudis themselves don’t believe the fiction of Iranian involvement,” the Iranian diplomatic chief underlined.

Also, the Yemeni Armed Forces spokesman’s remarks and images taken by the country’s drones before and after the attacks exonerated Iran of allegations by the US and Saudi officials.