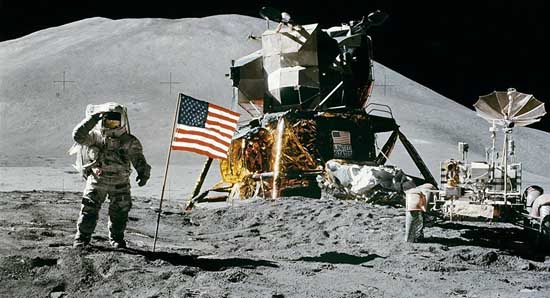 US President Donald Trump on Friday praised the US space program’s efforts to return astronauts to the moon by 2024 as “tremendous,” yet outlined that the ultimate goal is Mars.

NASA’s deadline for a 2024 return to the moon by astronauts was unveiled in March by Vice President Mike Pence. Earth’s natural satellite was also a primary goal for Space Policy Directive 1, a directive signed by Trump in December 2017 ordering NASA to send astronauts to the moon and aim for Mars. NASA’s Artemis program is developing the massive Space Launch System megarocket and Orion spacecraft to fly astronauts to and from the lunar neighbourhood. The agency also has plans for a station near the moon, called the Lunar Gateway, to serve as a staging ground for lunar surface exploration.

Earlier in June, Trump criticized NASA’s focus on the moon just weeks before the 50th anniversary of the Apollo 11 moon landing.

“For all of the money we are spending, NASA should NOT be talking about going to the Moon — We did that 50 years ago,” he wrote on Twitter, stressing that Mars should be the goal. NASA chief Jim Bridenstine has since stressed that the moon is a key waystation for future crewed missions to Mars.

However, on Friday, Trump said NASA was making “tremendous progress” toward Mars, and also noted the work of commercial companies like SpaceX and Blue Origin.

“In addition, rich people like to send up rocket ships. So between Bezos and Elon Musk and others, we’re leasing them our launch facilities, which you can’t get,” Trump said. “And they’ve actually done very well. They’ve said they’ve had great success.” He also added at the joint conference with Australia’s Prime Minister Morrison that in the US “rich people […] like building rocket ships and sending them up, and it’s okay with us.”

NASA is not alone in its goals to reach the Moon and Mars. The European Space Agency is building the service module for Orion and NASA has also received commitments from Canada and Japan to cooperate on lunar exploration this year. On Saturday, NASA added the Australian Space Agency, which was formed in 2018, to its cadre of moon partners with an agreement to cooperate on future lunar projects. Australian Space Agency head Megan Clark and NASA’s Deputy Administrator Jim Morhard signed a joint statement of intent for space cooperation.

“We are honored by today’s statement and the commitment of our friends from Australia to support us in our mission to return to the moon by 2024 with the Artemis program,” Morhard said in a NASA statement. “The strong relationship between NASA and the Australian Space Agency affirms NASA’s commitment to establishing sustainable exploration with our commercial and international partners by 2028.”