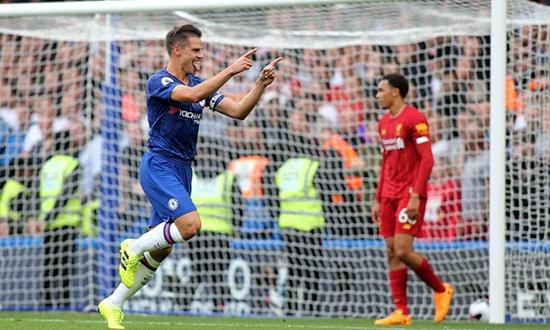 What a night to talk about the brilliance of Trent Alexander-Arnold’s opening goal at Stamford Bridge, to dwell for half a page solely on the parabola of the ball as it left his right foot, flew hard and flat outside the line of the post, then veered back into the top corner.

What a night to talk about Liverpool’s second goal in this 2-1 win, a fine delivery from Andy Robertson on the left, headed thrillingly into the same corner by Roberto Firmino; or indeed to linger on Chelsea’s sparky second-half response, a performance where they attacked with a careless sense of freedom and defended much the same way.

Liverpool were deserved winners at Stamford Bridge, with another display of fine, optimistic attacking football. At the same time Chelsea might also have taken a point.

Sad to say this fine, slightly chancy line was decided by something else besides these moments of skill; tipped one way, albeit not decided, by another key intervention from football’s own flawed deus ex machina.

Yes: it’s VAR! And with all due apologies. Here it comes, the radioactive cloud currently coating the Premier League in its toxic lustre, that tinge of sporting death that is ill-conceived, badly applied VAR. Every system needs time to find its rhythms.

This is complex, fast-evolving stuff, enacted on the hoof, and in a sport that excites furious, unceasing disagreement like no other human activity. But there is a problem here with refinement and with the limits of the technology. For the second time in two days a pivotal Premier League goal was ruled out by another of those problematic reviews. It is something that needs to be fixed.

Once again this came with the double-jeopardy punishment of a goal conceded at the other end while the crowd, the players and the manager still seemed to be absorbing the gut punch of all that short-lived elation.

This is an issue for players and coaches to resolve and work on: goal celebrations must now be guarded. They must come with an instant recovery time, a professionalism that means no more punching the air, no more touchline sprints, no more unalloyed joy. Like the sound of that? Well, it’s coming.

Here’s how it happened. Liverpool had begun like a train at a muggy, clammy Stamford Bridge. The opening goal was a moment of jaw-drop, Alexander-Arnold running on to Mo Salah’s backheel and producing that sublime finish.

Chelsea pressed back and thought they had equalised on 27 minutes, César Azpilicueta tapping home after a scramble in the goalmouth. VAR said otherwise. Mason Mount’s toe was decreed to have been offside in the build-up, his ankle having strayed across a line drawn by the VAR as Willian passed the ball down the left flank.

Stop. Rewind. Delete. Swallow all that emotion. And within two minutes Liverpool were 2-0 up though Firmino, another superbly worked goal (and some slack marking) that the post-VAR lull should not diminish. But still. Two days, two interventions, two problems.

It seems fairly obvious that Serge Aurier’s goal at Leicester on Saturday should have stood. The technology is not good enough to decree with absolute certainty whether Son Heung-min’s armpit was two millimetres offside at the precise moment (whenever that was) the ball was passed, as captured between frames by an elevated TV camera.

Drawing a best-guess straight line is not accuracy, consistency, or whatever it is we expect. There is only a pretence of academic rigour here. Understanding and acknowledging a margin for error, incorporating uncertainty is a part of being precise. This is simply bad science.

Fast forward 24 hours and Mount’s foot was, arguably, slightly more offside than Son’s armpit. But only arguably, and based on a line that there is no evidence we can actually trust. A middle-aged man playing with a light pen is not the Large Hadron Collider.

Plus, of course, what is offside actually for? Firstly to stop the game from losing its shape, dissolving into a cross between Aussie Rules and mass goal-hanging. And secondly, in its finer margins, to stop players cheating by pushing this enforced line and gaining an advantage.

In this case there was no advantage to Mount in having a toe, arguably, beyond the line of a player 20 yards away. It didn’t cause the game to lose its shape. It was offside because a man with a pen drew a pointlessly certain line.

Most people have by now “backed a horse” in this race and are intent on arguing it to the line either way. The idea of being pro or anti VAR has its ideological, even generational edge. Suggest this isn’t currently working and you risk becoming a Proper Football Man crying into his Charles Hughes coaching manual about the death of My Day When Things Were Good.

And yes, there is a paradox to complaining about discussion of VAR, on a page that discusses VAR at great (and no doubt) tedious length. But the sport is unavoidably affected by all this. There is a price to pay here for the most precious part of the spectacle, the miracle of the moment, the goal, the shared experience. Is it worth paying?