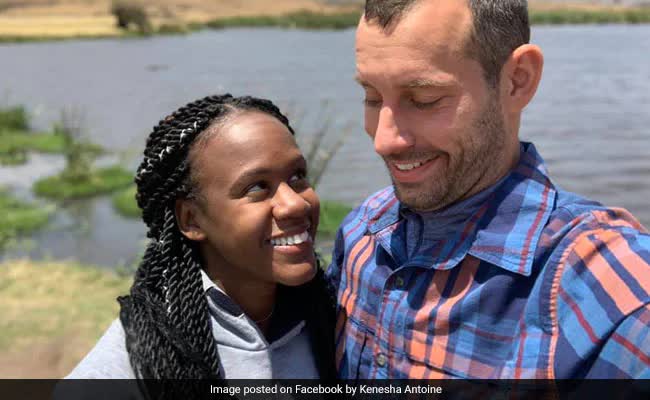 The American couple were vacationing in a submerged cabin, anchored in water more than 30 feet deep. On the third day, Steven Weber dived into the sea to ask Antoine to marry him.

Kenesha Antoine is mourning the loss of her boyfriend, who drowned while proposing to her in Tanzania.

The American couple were vacationing in a submerged cabin, anchored in water more than 30 feet deep. On the third day, Steven Weber dived into the sea to ask Antoine to marry him.

A heartbreaking video posted by Antoine on Facebook showed Weber, in goggles and flippers, swimming up to the window of their underwater room at the Manta Resort on Pemba Island, off Tanzania. He held a handwritten note against the cabin’s glass window.

Antoine watched him from inside, giggling and filming.

Weber flipped over the page to show a new message, “Will you marry me?” Then he removed an engagement ring from his bathing-suit pocket.

Antoine squealed with glee as her boyfriend swam away from the window and out of view. Antoine was overwhelmed with joy. But Weber was soon in danger.

According to the BBC, the hotel was notified of a “problem in the water.” By the time staff responded, hotel CEO Matthew Saus said “absolutely nothing could be done.”

The Mantra Resort confirmed Weber’s death, which is under investigation by the Zanzibar police.

“You never got to hear my answer, ‘Yes! Yes! A million times, yes’. We never got to embrace and celebrate the beginning of the rest of our lives together, as the best day of our lives turned into the worst, in the cruelest twist of fate imaginable,” she said.

“I will try to take solace in the fact that we enjoyed the most amazing bucket list experiences these past few days, and that we both were so happy and absolutely giddy with excitement in our final moments together.”