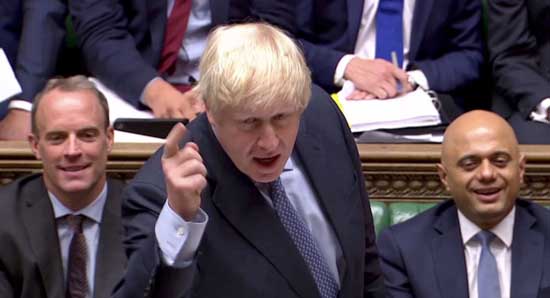 Prime Minister Boris Johnson is in New York for the UN General Assembly, where he is slated to meet with European leaders as part of his push to secure a Brexit deal by the end of October; the Brexit drama unfolds in the UK’s Supreme Court with a ruling expected later today on whether Johnson’s decision to suspend parliament was unlawful.

UK Prime Minister Boris Johnson has refused to rule out suspending parliament again before the current Brexit deadline of 31 October if the first suspension is struck down by a supreme court ruling on Tuesday.

“I am saying that parliament will have bags of time to scrutinise the deal that I hope we’ll be able to do.”

On the flight to New York to attend the UN General Assembly Boris Johnson made it understood that he would not feel obliged to resign if the justices rule he misled the Queen in his reasons for suspending parliament, and brushed off the idea of a negative verdict rendering his position untenable.

“I will wait and see what the justices decide, but as I have said before, I believe that the reasons for wanting a Queen’s speech are very good indeed.”

The Prime Minister also told reporters that he categorically ruled out any deal with Nigel Farage’s Brexit Party in the likelihood of an election, vowing that the Conservatives would contest every seat.

UK Prime Minister Boris Johnson sent lawmakers on a five-week break from 9 September through 14 October, insisting the suspension was a routine measure to prepare for a new session of parliament.

To prorogue parliament, Johnson had to receive the Queen’s approval, which he did.

Opponents claim he could have misled the Queen in advising her on the suspension, as he sought to stop lawmakers from interfering with his plan to leave the EU, with or without a Brexit deal.

Johnson told the monarch that the suspension was required to give him time to prepare a Queen’s Speech. The legal challenge hinges on whether he gave a false pretext and abused the power of prorogation.

Anti-no deal campaigners have since launched legal challenges against Johnson in England and Scotland, and eleven Supreme Court justices are currently looking into whether the prorogation of parliament was lawful.

The supreme court judgement is due to be announced at 10.30 a.m., following last week’s hearing.

In New York Boris Johnson reportedly hopes for three-way negotiations with Merkel and Macron to detail his plans to replace the Irish backstop and persuade them to make it clear that any new deal would have to be passed by 31 October.

However, Johnson first needs to persuade EU leaders to compromise on the Irish backstop.

Johnson himself on Monday cautioned against the likelihood of a Brexit breakthrough at talks on the sidelines of the UN General Assembly in New York.

“I would caution you all not to think that this is going to be the moment. I don’t wish to elevate excessively the belief that there will be a New York breakthrough,” he told reporters on the plane on the way to New York.