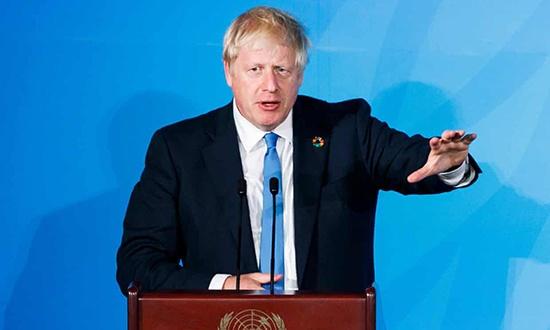 Boris Johnson has refused to rule out suspending parliament again if the supreme court rules on Tuesday that he abused his powers as prime minister in doing so earlier this month.

The British prime minister, who is in New York for a UN summit, also indicated he would not feel obliged to resign if the justices rule he misled the Queen in his reasons for suspending parliament.

Asked if he felt a verdict going against him would make his position untenable, Johnson said: “No. I think the reasons for wanting a Queen’s speech are extremely good.”

Speaking to reporters, Johnson also categorically ruled out any sort of deal with Nigel Farage’s Brexit party in the likely imminent election, saying the Conservatives would contest every seat.

The supreme court judgment, which could have a huge impact not just on Johnson’s future but also the wider ability of the courts to take a view in political decisions made by government, is due to be announced at 10.30am, following last week’s hearing.

The panel of 11 judges were tasked with hearing appeals from two separate legal challenges to Johnson’s decision to prorogue parliament – the technical term for gaps in parliamentary sessions which do not involve dissolution before an election – for five weeks from 9 September.

The move outraged many MPs, who said it was an attempt to muzzle them at a crucial time in Brexit negotiations.

A case brought by the campaigner Gina Miller at the high court in London was rejected. However, a case in Scotland brought by a cross-party group of MPs and peers won a ruling that the decision was unlawful because it was “motivated by the improper purpose of stymieing parliament”.

Johnson has repeatedly insisted that the prorogation was purely technical, allowing a pause in Commons proceedings so a new set of planned legislation could be announced in a Queen’s speech.

Asked if it would be a resignation matter if he lost the case, Johnson said: “I will wait and see what the justices decide, but as I have said before, I believe that the reasons for wanting a Queen’s speech are very good indeed.”

The PM declined to rule out prorogation again before the current Brexit deadline of 31 October if the first suspension was struck down, saying only: “I am saying that parliament will have bags of time to scrutinise the deal that I hope we’ll be able to do.”

The plan to prorogue parliament and the court cases against it

At the supreme court hearing, Miller’s barrister, Lord Pannick, argued that if the court ruled in her favour but declined to end the suspension, it would be possible for the Speakers of the Commons and Lords to reassemble parliament themselves.

Meanwhile on Monday, the head of the Bar Council condemned unidentified “Number 10” sources who were quoted in the weekend papers as warning the judiciary about taking sides over Brexit.

Richard Atkins QC, chair of the organisation that represents barristers in England and Wales, also criticised death threats sent to one of the litigants in the prorogation case whose home address was revealed on Twitter.

“It is a low point in the history of our nation when a faceless ‘No 10 source’ refers to ‘remainiac lawyers’ and issues threats to the judiciary about its constitutional role suggesting that judges take sides,” said Atkins.

“The rule of law and the independence of the judiciary are fundamental pillars of our democracy. Judges do not take sides as the Downing Street source suggests, but apply the law ‘without fear or favour’.”