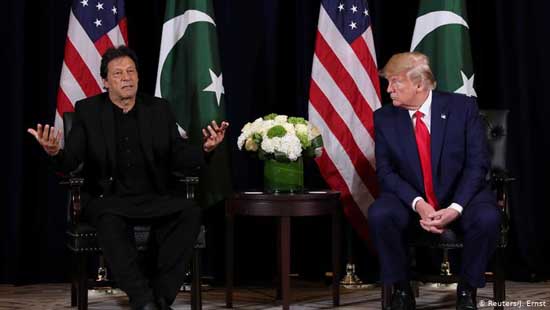 When Pakistani PM Khan met with US President Trump, his main focus was on the Kashmir conflict. But experts say that after Trump’s open support for Indian PM Narendra Modi in Houston, Khan faced a difficult task.

The meeting between Pakistani Prime Minister Imran Khan and US President Donald Trump on Monday was their second in two months and took place just a day after Trump joined Indian Premier Narendra Modi in a 50,000-strong public rally in Houston, Texas.

The Modi-Trump show on Sunday likely had an impact on the Khan-Trump meeting. The Pakistani prime minister has been trying his best to garner international support for Islamabad’s stance on Kashmir, after India stripped Jammu & Kashmir of its autonomous status on August 5 and imposed a lockdown on the region.

PM Modi’s move sparked domestic and international criticism, as he sent tens of thousands of additional troops to the Himalayan region, following a rise in attacks in the Muslim-majority region by separatists whom India insists are sponsored by Pakistan.

Khan, who will address the UN General Assembly session on September 27, is hoping that the international community will admonish Modi for his actions on Kashmir. But Pakistan’s diplomatic efforts on this front have so far received a lukewarm response from world leaders.

At his meeting with Trump, the US president only reiterated his readiness to mediate between India and Pakistan over Kashmir, which is far less than Khan will have hoped for.

And the kind of response Khan was expecting from the US on Kashmir has anyway been somewhat marred by Trump’s display of public affection for Modi at the Houston rally. Not only did Modi justify — in Trump’s presence — his government’s decision to scrap Kashmir’s autonomy, he also hit out at Pakistan for its alleged support to Islamist extremists.

For Trump’s part, at the rally he hailed US-India ties, and more importantly, did not mention Kashmir. Addressing the Indian-American community at the Sunday event, Trump said: “We are committed to protect ourselves from radical Islamic terrorism. To keep our communities safe, we must protect our borders. Border security is vital to [the] US and India. We understand that.”

Since August 5, an estimated 4,000 people have been arrested in the Jammu and Kashmir region, according to a report dated September 6, although many people have since been released.

The arrests come as authorities attempt to crack down on protests and unrest in the weeks since the region was stripped of its special status. India’s moves have strained ties with Pakistan, which also claims sovereignty over the region.

Furthermore, the Indian-controlled region has experienced frequent communication blackouts since August 5. Pakistan’s ambassador to Germany told DW on September 12 that India must end this lockdown in order to restore diplomatic relations with Pakistan and find a solution to unrest in the area.

Pakistan and India both rule the disputed Himalayan territory of Kashmir in part, but claim it in full. The restive region is a flashpoint between the nuclear-armed archrivals. China, too, has some territorial claims in the area.

Some US politicians and Congress representatives have slammed Modi for human rights violations in Kashmir. But analysts say that Trump joining hands with Modi will be seen as an endorsement of New Delhi’s policies.

Anwar Iqbal, a Washington-based analyst, told DW that the Howdy, Modi! event is “not necessarily an endorsement” of Modi’s Kashmir policy, “but it does show India’s growing global importance.”

“The US sees India as a major player in world affairs and wants it on its side,” the expert said.

But some observers say that there is still diplomatic room for PM Khan to get something for his country.

“It is President Trump’s balancing act. He believes in a transactional relationship with any country, and right now both India and Pakistan remain equally important for him for different reasons,” Ali K Chishti, a Pakistani security analyst, told DW.

“Khan’s visit to the US is important, but Washington would like to focus more on the Afghan peace talks,” Chishti added.

The analyst also expressed dissatisfaction with Islamabad’s diplomatic efforts on Kashmir. “It seems that Pakistan was taken aback by India’s Kashmir move and was not prepared. The response by the country’s foreign office has not been satisfactory.”

The Afghan conflict, observers say, does provide Islamabad with an opportunity to get at least a bit of diplomatic support from the US.

Earlier this month, President Trump called off peace talks with the Taliban. The move came despite both sides reaching an agreement in Doha, as confirmed to DW by Suhail Shaheen, the insurgent group’s spokesman in Qatar.

Experts say that Pakistan has considerable influence on the Taliban, and it could help Trump in brokering a deal that is acceptable to all parties to the Afghan conflict. But can it get the kind of US support it wants on Kashmir in return? It would be Khan’s biggest diplomatic test since coming to power last year.