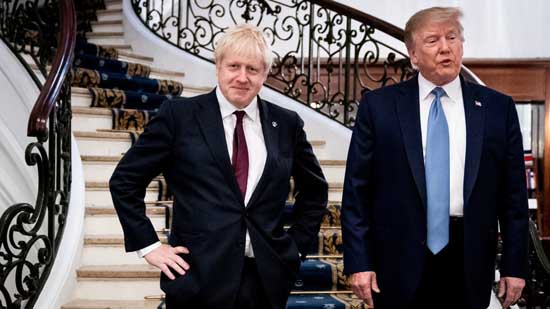 British Prime Minister Boris Johnson has called for a “new” nuclear deal with Iran, winning approval from US President Donald Trump but raising questions if London will now follow Washington in abandoning the existing agreement.

The UK was one of the six countries that signed the Joint Comprehensive Plan of Action (JCPOA) with Tehran in 2015, a deal intended to limit Iran’s nuclear program to peaceful research with UN blessing. Trump unilaterally withdrew the US from the JCPOA in March 2018, but other signatories have remained committed to the deal on paper – until now.

“Whatever your objections to the old nuclear deal with Iran, it’s time now to move forward and do a new deal,” Johnson told Sky News on Monday, ahead of the UN General Assembly session in New York. He added that the UK was “trying to bring people together and de-escalate tensions.”

That, however, contradicts a statement he made on the way to New York, when he said the UK would “consider in what way we could be useful,” if asked by Saudi Arabia or the US to get involved militarily against Iran.

Within hours, a spokesman for 10 Downing Street sought to clarify Johnson’s remarks, saying that the PM “supports the JCPOA.”

“The Iranians aren’t currently in compliance and we need to bring them back into compliance. If there’s a way to do that we’re open to discussing possible solutions,” the unnamed spokesman told Reuters.

Either way, Johnson seems to have impressed Trump, who complimented the British leader on Monday when told about his remarks.

“I respect Boris a lot and I am not surprised at all that he was the first one to come out and say that,” the US leader said when asked about Johnson’s comments. “He does want a new deal… The other deal was ready to expire. It was a very short number of years left.”

The JCPOA was designed to go into effect in 2016 and expire by 2025. Much of the agreement was designed around lifting US sanctions, however, and they have all been reimposed by the Trump administration — along with new ones being added almost daily.

Iran has pointed to Trump’s unilateral withdrawal from the JCPOA as proof that the US can’t be trusted to negotiate another agreement in good faith. However, Tehran has offered to enshrine the nuclear deal into permanent law and agree to intrusive international inspections to ensure its atomic research is peaceful, demanding in return that Washington ratify the deal in Congress and lift the sanctions, to eliminate the possibility of another Trump-like reversal.

“Yes, we did offer that and that offer is still on the table,” Iranian Foreign Minister Javad Zarif told CNN on Monday. Nothing was said about a new deal, however.

While the EU has held negotiations with Iran to keep the JCPOA alive, Tehran has complained about European unwillingness to defy American dictates. Johnson, who became PM in July on a promise to push through the stalled Brexit process of leaving the EU, appears to have aligned his foreign policies more closely with Washington than Brussels, as further evidenced by his remarks on Iran – whatever they might mean in the end.