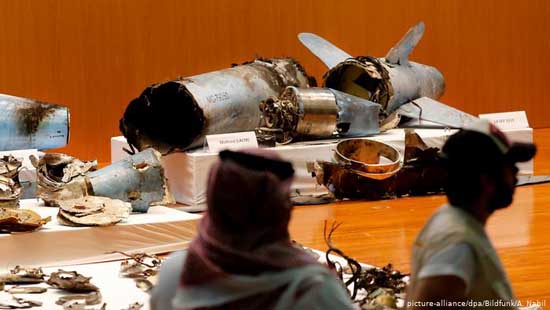 Angela Merkel, Emmanuel Macron, and Boris Johnson have taken the US line on the attacks on Saudi oil facilities, saying it was “clear” Iran was behind the strikes. However, the three leaders called for diplomacy.

Germany, Britain and France said on Monday Iran was behind the attack on Saudi oil facilities earlier this month and called on Tehran to avoid further “provocation.”

“It is clear for us that Iran bears responsibility for this attack. There is no other explanation,” French President Emmanuel Macron, German Chancellor Angela Merkel and British Prime Minister Boris Johnson said in a joint statement after meeting on the sidelines of the UN General Assembly.

But the three European powers — all signatories to the 2015 nuclear deal from which the United States withdrew — stressed that diplomacy was the answer to avoid a potential conflict in the Middle East.

“The time has come for Iran to accept a long term negotiation framework for its nuclear program, as well as regional security issues, which include its missile programs,” the statement read.

“We call on Iran to commit to such a dialogue and to avoid any new provocation and escalation,” it continued. “The attacks also highlight the need for a de-escalation in the region, for sustained diplomatic efforts and engagement with all sides.”

Boris Johnson said in an interview with NBC that US President Donald Trump could negotiate an improved nuclear deal with Iran.

“I think there’s one guy who can do a better deal… and that is the president of the United States. I hope there will be a Trump deal,” he said.

However, Iranian Foreign Minister Mohammad Javad Zarif ruled out negotiating any new nuclear agreement. European countries had failed to “fulfill their obligations” under the 2015 pact, he tweeted.

Alignment with US view

The European statement increases the pressure on Iran after the United States and Saudi Arabia already blamed Tehran for being behind the September 14 attack that temporarily knocked out half of the kingdom’s oil output.

Iran-aligned Houthi rebels fighting a Saudi-led military intervention in Yemen claimed credit for the sophisticated air attack, but US officials have said it was likely launched from Iran or Iraq. Iran has denied any involvement, saying that the Houthi rebels “have every reason to retaliate” for the Saudi-led coalition’s bombardment of their country.

US Secretary of State Mike Pompeo expressed his gratitude at Germany, France and Britain’s support for the US argument.

“The US thanks our close friends, UK, France, and Germany, for their clear articulation of Iran’s sole responsibility for the act of war against Saudi Arabia and its impact on the region and the world,” Pompeo wrote on Twitter. “This will strengthen diplomacy and the cause of peace. We urge every nation to join in this condemnation of Iran’s actions.”