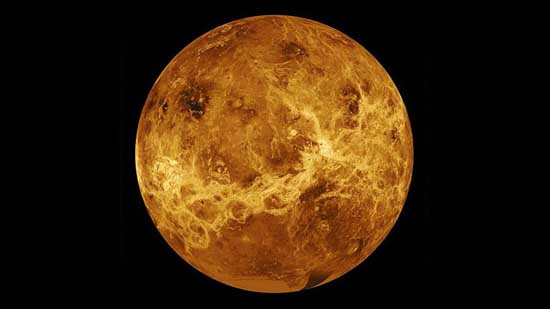 Our nearest planetary neighbor could have sustained a perfectly habitable environment for billions of years, a new study says, until something caused it to undergo a drastic ‘resurfacing’, turning it into a “hellish hot-house.”

Since NASA’s 1978 Pioneer mission found signs that shallow oceans once flowed on Venus, scientists have wondered if it indicated the planet could once have had a stable enough climate to support liquid water – a key element in assessing the habitability of any planet.

Often dubbed ‘Earth’s sister planet’ due to the similar size and mass, Venus is believed by many to be too hot and too close to the Sun to have sustained liquid water.

Carried out by Dr. Michael Way and Anthony Del Genio of NASA’s Goddard Institute for Space Studies, new research studied five scenarios involving different quantities of water coverage on Venus, and found that in every case the planet could maintain suitable temperatures to sustain liquid water for a three-billion-year period.

The pair say Venus could potentially have maintained this temperate climate right up to the present day if it hadn’t been for a series of events 700 million years ago that sparked a catastrophic ‘outgassing’ of carbon dioxide stored within rocks on the planet.

“Our hypothesis is that Venus may have had a stable climate for billions of years. It is possible that the near-global resurfacing event is responsible for its transformation from an Earth-like climate to the hellish hot-house we see today,” said Way.

It’s still not clear what caused the extreme outgassing which resulted in the planet’s transformation, though volcanic activity is one possibility. Temperatures on the surface of Venus can be hot enough to melt lead, according to NASA, while the atmosphere is incredibly dense.