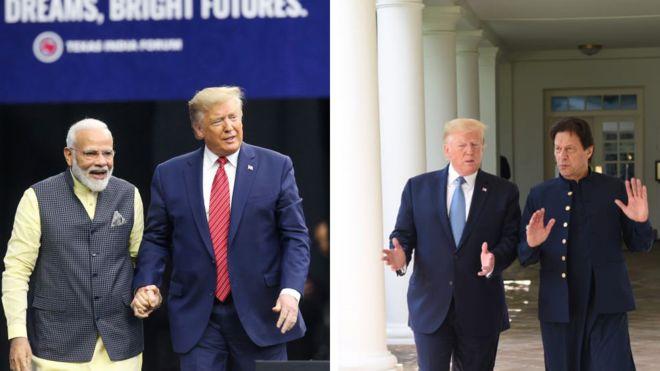 Does sharing a stage with the Indian Prime Minister outweigh a warm interaction with Pakistan’s leader?

That is the question many are asking following US President Donald Trump’s interactions with the leaders of the South Asian rivals.

He was on stage with India PM Narendra Modi when he blamed Pakistan for harbouring those responsible for terror attacks in both the US and India.

The next day Mr Trump called himself a “friend” of Pakistan.

He also said Pakistan’s Prime Minister Imran Khan was a “great leader”, talked about his many Pakistani friends and proceeded to dodge a question about Mr Modi’s rhetoric against Pakistan by saying that Iran was actually the “number one state of terror in the world”.

Needless to say, this turn of events took a lot of Indian social media by surprise.

A day earlier, buoyed by the success of the shared rally between Mr Modi and Mr Trump in Texas, many had painted the event as yet another victory against Pakistan by India.

Memes showing a disappointed and dejected Imran Khan were widely shared and Twitter pundits called it “another surgical strike” against the country – a reference to India’s claim that it launched a covert attack against militants on Pakistani soil.

Following the latest development however, things are very different.

And in Pakistan, social media users heaped praise on Mr Khan while hitting back at Indians. The hashtags #ManOfPeaceImranKhan, #ImranKhanDoctrine and #Imrankhanforpeace were all trending in Pakistan on Tuesday morning.

But what do Mr Trump’s interactions with the two leaders actually signify?

Indian journalist Maha Siddiqui tweeted that Trump was “clearly saying to India and Pakistan individually what they would like to hear while keeping his focus clearly on US troops and interest in Afghanistan”.

Another senior journalist and editor Shekhar Gupta said, “Trump is being Trump…he wants his trade deal from India and help from Pakistan in Afghanistan. Of course he wants the Nobel too. He doesn’t care for either country or leader. But there’s a clear hierarchy in ties with the two countries. I think India/Modi will take it.”