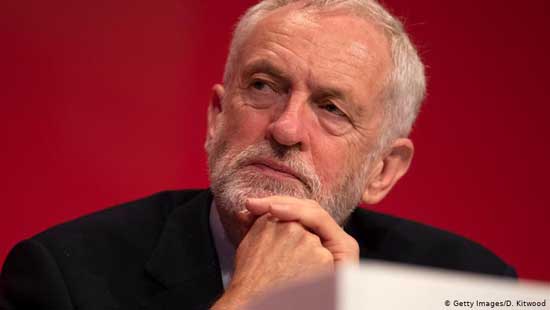 The leader of Britain’s opposition Labour has narrowly won support for his Brexit strategy from party members. The focus is now on winning an election on social justice issues.

Grass-roots pro-EU members failed Monday to persuade Britain’s Labour party to campaign “energetically” that the UK stay within the European Union during a series of close-run votes on three motions.

It means the party would not push for “remain” or “leave” should there be a second Brexit referendum or a national election.

Delegates at the party’s annual conference in Brighton ended up backing leader Jeremy Corbyn’s stance to first try to win an election, then renegotiate a Brexit deal once in power. After that, they would hold a second referendum on the deal or remaining in the EU before holding a special conference to decide Labour’s position.

Leadership and base split

Analysts say Corbyn has stayed cautious to avoid alienating Labour voters who in certain electorates during the 2016 Brexit referendum voted to leave the EU.

In recent speeches he has instead dwelt on Britain’s growing economic inequality, workers’ rights and other social issues, including a shorter working week.

However, grassroots lobbyist Mike Buckley said the vast majority of party members wanted to remain in the EU under all circumstances.

“If we add a commitment to Remain, we will at last be providing the leadership the country needs,” Buckley said.

Conservative Prime Minister Boris Johnson wants a 31 October exit with or without a divorce deal despite warnings from EU leaders this may lead to reintroduced controls along the inner-Irish border.

Two surveys published last weekend put Labour 15% behind Johnson’s conservatives and close to being overtaken by the pro-EU Liberal Democrats.

Brexit is also opposed by the Scottish National Party and smaller groups.

US troops ‘to leave Afghanistan by 11 September’