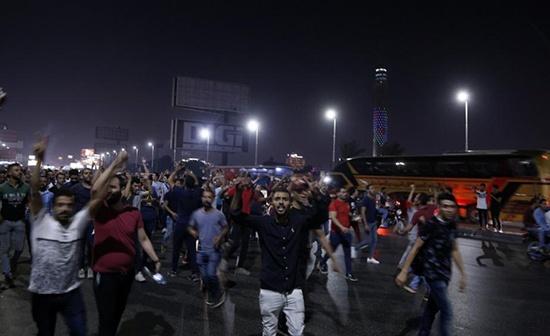 Wave of arrests follows protests against the government in major Egyptian cities and clashes with security forces in Suez.

ByMEE staff
More than 500 people have been arrested in connection with a wave of anti-government protests across Egypt since Friday, according to information published by an Egyptian rights group.

A list of those detained was published on Monday by the Egyptian Centre for Economic and Social Rights, a Cairo-based civil society organisation.

They include Mahienour El-Massry, a leading human rights lawyer who was arrested outside the state security prosecutor’s headquarters on Sunday as she was leaving after visiting others in detention.

Crowds took to the streets of Cairo and other cities on Friday night in the first major street protests against Egyptian President Abdel Fattah el-Sisi since he seized power in a military coup in 2013.

Middle East Eye’s correspondent in Cairo reported that security forces had used violent force and arrests to disperse crowds heading towards Tahrir Square, the epicentre of the 2011 uprising against former president Hosni Mubarak.

“No deaths, but I saw about 20 to 25 people arrested and held in police trucks. Some were released later. Currently downtown is full of riot police and plain-clothes policemen,” said the correspondent, who remained anonymous because of restrictions on journalists in the country.

Video footage posted online showed security forces in cities across Egypt rounding up protesters and taking them into custody.

Elsewhere, protesters clashed with security forces in Suez on Saturday night, with one witness telling the AFP news agency that police had used tear gas and live ammunition, causing injuries among protesters.

ECRF said on Sunday that it had recorded arrests in at least 12 locations, including Cairo, Giza, Alexandria, Suez, and towns such as Dakahlia, Qalyubia and Kafr el-Sheikh.

Human Rights Watch has called on the Egyptian authorities to allow peaceful protest and said that Sisi’s government had a track record of cracking down on opposition.

“The authorities should recognise that the world is watching and take all necessary steps to avoid a repetition of past atrocities.”

Tens of thousands of people have been detained by Sisi’s government since 2013 in a widespread crackdown on opposition that has targeted activists from the now-banned Muslim Brotherhood of deposed former president Mohamed Morsi and other political dissidents.