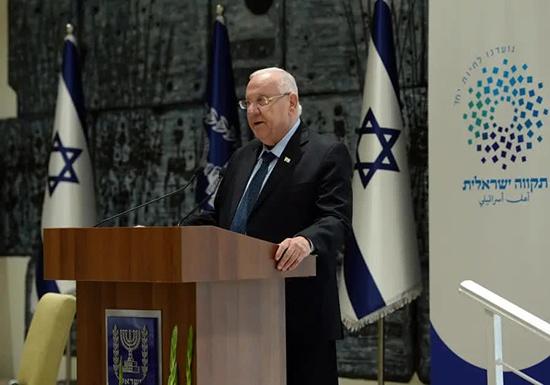 President Reuven Rivlin is set to meet with Prime Minister Benjamin Netanyahu and Blue and White leader Benny Gantz at 6:30 p.m. to announce which of them will form the next government.

After completing his consultations with all nine political factions represented in the incoming Knesset, which is set be inaugurated next week, President Reuven Rivlin emerged to thank the media for its attendance, but explained that he still had not finished the process for giving a mandate to one of the two main candidates, Prime Minister Benjamin Netanyahu or Blue and White leader Benny Gantz.

For this reason, he refused to answer questions before meeting with Netanyahu and Gantz on Monday night, saying that whatever answer he gave to any question would provoke another question.

Relating to the fact that the consultations had been live-streamed so that all of Israel would be privy to them in real time, Rivlin said that he was happy to be able to do this in matters affecting the nation as a whole.

First to meet with Rivlin on Monday was the delegation of United Torah Judaism.

Media interest had waned since the previous evening. The television crews and still photographers were still in attendance but most of the reporters who had crowded the President’s Residence on Sunday night were absent.

Prime Minister and 40 for Netanyahu. The number of  supporters for Gantz had been reduced to 43 when 3 members of The Arab Joint List had withdrawn their recommendation.

UTJ support for Netanyahu  had given the prime minister a lead for the first time, said Rivlin, who asked if UTJ would be willing to go with another candidate.

Deputy Health Minister Yaakov Litzman said that he wanted to make it very clear that the only nominee for his faction is Netanyahu who he said had fulfilled all the conditions of the agreement he had signed with them.

Both Litzman and MK Moshe Gafni complained bitterly over the inflammatory campaign that had been waged against the ultra-Orthodox community. It was one thing they said to speak out against ultra-Orthodox legislators but another to incite against a whole sector of society – something that is untenable in a Western democracy.

Gafni also spoke of the urgency in forming a government in order to deal with the huge deficit incurred by the outgoing government.

The Yemina delegation led by Ayelet Shaked and Moti Yogev was also adamant that it would not accept any nominee other than Netanyahu, but called on Gantz to meet with the prime minister in order to form a national unity government and thus avoid a third round of elections.

Shaked said that she had personal dreams and ideological dreams but was aware that under the circumstances she has to face reality.

In the event that the mandate to form a government would be given to Gantz, she said, the whole of the right-wing bloc would convene to decide what to do next.

Labor-Gesher, headed by Amir Peretz and Orly Levy-Abekasis, focused on social issues – although Peretz, being a resident of Sderot, also referred to the security situation which he said was crucial.

Matters of social welfare are no less crucial he said underscoring that housing must become affordable as it was in the 1960s. Levy-Abekasis was incensed that the government taxes life-saving medications.

She said that her friend Sharon was diagnosed with cancer. The medication which could prolong her life was not in the health basket and costs NIS15,000 per month. Sharon died two months ago. Her husband Ronen said he could understand that such a rare drug could cost so much, but it bothered him to pay a tax of NIS 2,500 on it each month.

“Cancer is not a gift,” she said, emphasizing that “the government has no right to tax life-saving medications.”

MK Itzik Shmuly, citing former Likud prime minister Menachem Begin as a democratic liberal, queried what has been lost since.

The Democratic Union headed by Nitzan Horowitz voiced its determination to get rid of Netanyahu and therefore recommended Gantz.

All five of its members met with Rivlin and were warmly embraced by him.

The president regretted that outgoing MK Esawi Frej, who had been re-elected to the Knesset in the April elections, had missed out in September.  Rivlin described Frej as a bridge between the Arab and Jewish communities.

All five of the Democratic Union legislators spoke in the most disparaging terms against Netanyahu, who Horowitz said was not suited to be a prime minister.

He and the others spoke of incitement, hatred and racism fostered by Netanyahu, which they believed would be abolished under Gantz.  Netanyahu’s incitement and divisiveness endangers democracy, said Horowitz, adding that most of the public had voted for a different government. Confident that Gantz would be the one to form a government, Stav Shaffir declared: “We are moving from an era of fear to an era of hope.”

Netanyahu’s corruption is not just criminal, she charged, but also moral.

“Not only Netanyahu, but all of the Likud have lost their way,” said Yair Golan.

At the various meetings, Rivlin repeatedly referred to Yisrael Beytenu as “fence sitters” and said that nowadays there is not much difference between Left and Right, and that it was difficult to distinguish between them.