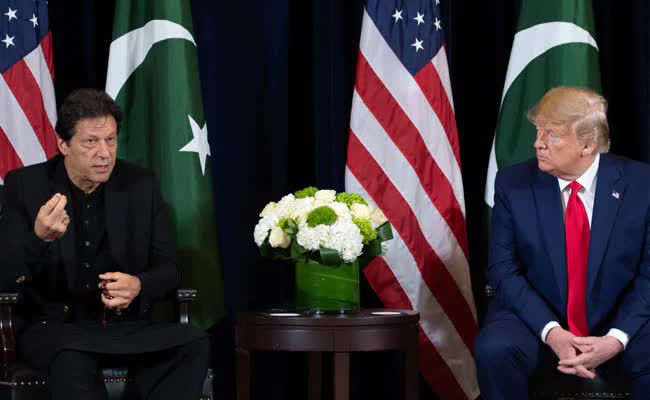 After the meeting, Donald Trump said that the U.S. will increase trade with Pakistan.

Imran Khan said he would urge Donald Trump to resume talks with the Taliban.

Hours before a planned meeting with President Donald Trump, Pakistani Prime Minister Imran Khan blamed him for derailing a peace deal aimed at ending the longest-running war in U.S. history.

Speaking at the Council on Foreign Relations in New York, Khan said he would urge Trump to resume talks with the Taliban to pave the way for a cease-fire and the withdrawal of American troops from Afghanistan.

Earlier this month, talks between the U.S. and the Taliban broke down after Trump tweeted he had canceled secret meetings at Camp David intended to allow a drawdown of American forces after 18 years in Afghanistan. The White House said it didn’t want to reward the Taliban for bad behavior, citing the recent death of a U.S. soldier from a car bombing in Kabul. Khan said he would recommend that Trump deliver on his campaign promise to end America’s “forever wars” because a peace pact “is the only way” forward.

After the meeting, Trump said that the U.S. will increase trade with Pakistan. He also reiterated his offer to help resolve the dispute over the territory of Kashmir.

Before meeting Trump, the Pakistani leader said relations with his nation’s other neighbors have also proven challenging. Khan said he’s “more worried about India” than his own country, warning about the rise of Hindu nationalists.

Meantime, the uproar after an attack on Saudi Arabian oil facilities — which sent oil prices climbing as the Trump administration blamed Iran — threatens to “screw up” Pakistan’s budget, Khan said. The nation is a net oil importer.

Pakistani markets have withstood the spike in crude prices. The nation’s benchmark stock gauge, down a world-leading 23% in local currency terms this last 12 months, has edged higher in the past month, while the rupee has stabilized after the central bank boosted borrowing costs to a record.

The prime minister also lauded the nation’s “special relationship” with China despite criticism over Beijing’s crackdown on Muslim minorities and concern that billions of dollars in Chinese loans could put Pakistan in a debt trap.

“They helped us when we were at rock bottom,” said Khan, who was set to meet a Chinese delegation after his remarks. “China is one country we can all learn from.”