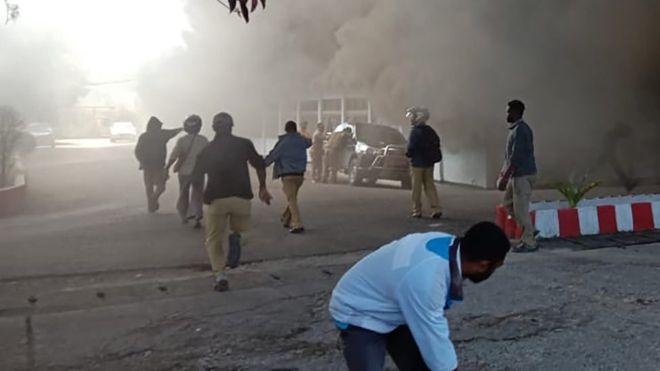 At least 21 people are dead and dozens injured after hundreds of protesters, mostly high school students, set fire to several buildings in a city in Indonesia’s eastern region of Papua.

Among the dead were those trapped inside the buildings in Wamena city.

The protests on Monday were reportedly triggered by a teacher’s racist comments – an allegation the police called a “hoax”.

It’s the latest violence in the region, which saw weeks of unrest in August.

Four people died in a separate incident in the provincial capital of Jayapura, bringing the total death toll to 25.

The incident in Jayapura took place after a mob of students reportedly attacked a soldier and police officers with machetes and rocks.

The day of violence came after a period of relative calm in the region, which had last month been rocked by mass demonstrations in response to claims of racism.

The previous protests stemmed from an incident where nationalist groups accused Papuan university students in Surabaya of damaging an Indonesian flag during Independence Day celebrations.

The groups had goaded the students, calling them “monkeys”, “pigs” and “dogs”.

A spokesman for a West Papua separatist group said the violence in Wamena was triggered by racist slurs directed at students by a teacher.

However, Papua police denied this, calling it a “hoax”. They said clashes had broken out after a fight between students from different schools.

Meanwhile in Jayapura, clashes took place between security forces and protesters, with pictures showing scores of police gathered outside a university.

Mr Daryanto told news agency the Associated Press that a mob of students had attacked a soldier and police officers in Jayapura with machetes and rocks.

Papua is divided into two provinces, Papua and West Papua, and became a part of Indonesia following a controversial referendum.

The former Dutch colony initially declared independence in 1961 but was controversially annexed by Indonesia in 1969.

A referendum on its independence was held in 1969 but only about 1,000 people were allowed to vote.

As a result, a low-level separatist movement, fighting for independence, continues to this day.

The Indonesian military, meanwhile, is accused of gross human rights abuses in their attempt to suppress any form of dissent in the province.