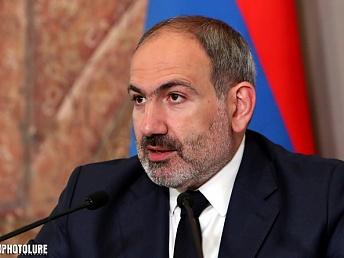 Pashinyan’s press conference was attended by California-based Armenian mass media representatives and journalists who have arrived from Armenia to cover his working visit to the USA, according to an Armenian government press release.

Pashinyan said the citizens of Armenia showed their attitude to both ex-presidents back in 2018, and continues to do so today as well.

‘These people don’t understand that they no longer have a chance to re-engage in political activity in Armenia. And not because I or someone else doesn’t want it. The Armenian people will not allow it,” he said.

Pashinyan slammed the ex-presidents’ and their supporters’ statements that Kocharyan and Sargsyan contributed to the establishment of Armenian statehood ‘in the sweat of their faces.’

“What did they build in the sweat of their faces?” Their millions? Yes. And if they mean just that, there is a big threat that the “castles” they built and the millions they piled will be lost very soon,” he said.

The Prime Minister emphasized that there would be no compromise with respect to corrupt representatives of the former authorities.

“I have already stated that Serzh Sargsyan’s family was corrupt and must return all that was stolen. They already returned one part, now the turn is for the rest,” he said. “Everything should be returned to the penny. We mean also Sargsyan’s son-in-law, Mikael Minasyan, and his other brother, Levon Sargsyan, who are defendants in criminal cases. None of them have a political perspective in Armenia anymore,” Pashinyan noted.

According to the Investigative Committee, Levon Sargsyan illegally intervened in a $250 million project to rebuild major Armenian highways in order to enrich himself and two businessmen linked to him. It said he has been charged with bribery and money laundering.

Ex-president Robert Kocharyan is charged with overthrowing the constitutional order and taking bribes. The case dates back to late February and early March 2008 following the disputed presidential election, when then prime minister Serzh Sargsyan was declared the winner, angering the opposition, led by the first Armenian president Levon Ter-Petrosyan and setting off 10 days of nonstop protests that led to a crackdown on March 1, in which 10 people were killed and more than 200 injured.