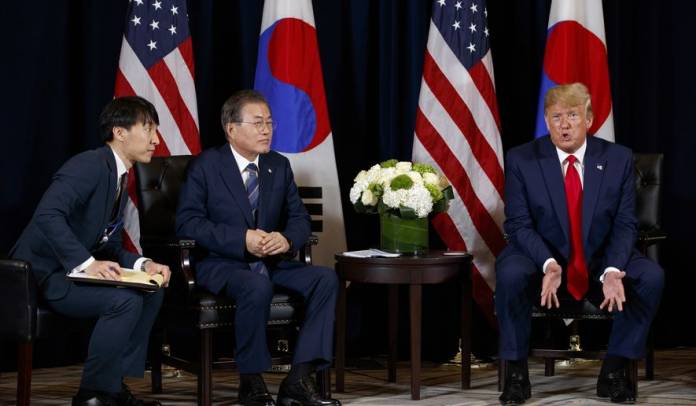 By Guy Taylor – The Washington Times

NEW YORK — President Trump and his South Korean counterpart held a high-stakes meeting on the sidelines of the annual U.N. General Assembly meeting Monday to talk through Mr. Trump’s strategy ahead of a possible third summit with North Korean leader Kim Jong-un in the coming months.

Mr. Trump and South Korean President Moon Jae-in revealed few details of their closed-door discussion, although Mr. Moon’s top foreign policy adviser said ahead of the meeting that Mr. Moon would ask Mr. Trump to embrace a softer negotiating style on North Korean denuclearization after the failure of February’s summit in Hanoi.

It remains to be seen whether Mr. Trump will step back from the all-or-nothing posture, although some believe he may because the posture was advocated by National Security Adviser John R. Bolton, whom the president recently fired.

Mr. Trump suggested Monday that he is eager to breathe new life into talks with North Korea, which have been stalled since Hanoi. The president told reporters outside U.N. headquarters in Manhattan on Monday morning that a third summit with Mr. Kim “could happen soon.”

“Right now people would like to see that happen,” Mr. Trump said Monday evening before heading into his meeting with Mr. Moon.

Mr. Moon told Mr. Trump in front of reporters that “when you have your third summit with Chairman Kim, maybe I hope that this will go down as a truly historic moment in world history. This will be a great achievement that equals a great transformation in terms of a complete denuclearization on the Korean Peninsula.”

The South Korean president also told Mr. Trump that “I always marvel at your imagination and bold decision-making.”

The comments added to an air of anticipation about the prospect of another Trump-Kim summit.

Although working-level talks have stalled, Mr. Trump and Mr. Kim did hold a brief handshake meeting at the Demilitarized Zone dividing North and South Korea in June. A month earlier, Mr. Trump said he had received a “beautiful” letter from the North Korean leader.

The president has also publicly downplayed recent North Korean short-range missile tests, a sharp departure from two years ago when he threatened in a speech at the U.N. General Assembly to annihilate North Korea and derided Mr. Kim as “Little Rocket Man.”

Mr. Trump is slated to speak Tuesday at the annual gathering.

With North Korea reportedly not having sent its top diplomat this year, analysts touted the significance of Mr. Trump’s meeting with Mr. Moon, who is eager to expand diplomacy with the Kim regime and is widely credited with facilitating the first Trump-Kim summit in Singapore last year, as well as the two subsequent Trump-Kim meetings.

Some conservative scholars argue that Mr. Trump would be unwise to yield to South Korean requests that he shift from his hard negotiating posture, particularly if such a shift means accepting any kind of upfront sanctions relief for Pyongyang.

“The president should be very careful because the North Korean government regards South Korean President Moon Jae-in as the Trump whisperer,” said Nicholas Eberstadt, who focuses on North Korea at the American Enterprise Institute. “Moon Jae-in has had more discussions with Kim Jong-un than President Trump has had. He’s the emergency go-to guy for North Korea when it looks as if talks with the U.S. might not happen.”

“Trump should be very cautious about this,” he said. “We have so far been given no sign whatsoever that the North Korean government is going to agree to our definition of denuclearization.”

Although Mr. Kim committed in a joint statement signed at last year’s Singapore summit to pursue the goal of “denuclearization of the Korean Peninsula,” Mr. Eberstadt said, Mr. Trump would best keep up maximum sanctions pressure on Pyongyang until there is a clear indication that the North Koreans are not lying to create cover while continuing to clandestinely expand their nuclear weapons capabilities.

“The sanctions regime is at the moment the only thing that is standing between the North Korean government and an even more rapid achievement of the capability to incinerate San Francisco,” he said, referring to the Kim regime’s development of intercontinental ballistic missiles and warhead-sized nuclear bombs in violation of decades of U.N. Security Council resolutions.

“We need to see some proof that the North Korean government would honor its promise on any denuclearization declaration ever,” Mr. Eberstadt said. “For example, a good faith down payment for future progress would be something we’ve never gotten from North Korea — a declaration of their nuclear inventory, their homework, their research.”

On a separate front, the issue of whether or not U.S. and North Korean officials can trust each other when it comes to the definition of “denuclearization” remains a source of contention in national security circles.

Most on the U.S. side view denuclearization to mean North Korea rids itself of all nuclear weapons and nuclear-capable missile systems in a complete, verifiable and irreversible manner, in the presence of international inspectors deemed trustworthy by Washington.

But the Singapore joint statement called more broadly for the “complete denuclearization of the Korean Peninsula.” That wording has fueled debate over the extent to which Pyongyang might want the verifiable removal of numerous nuclear-capable U.S. military assets protecting South Korea and Japan.

The debate factored into comments the South Korean foreign minister made ahead of the Trump-Moon meeting.

“Since the breakdown in Hanoi … there has been a lot of discussion between Washington and Pyongyang over the issue of the desired end state for denuclearization, and the clarification of actual denuclearization. Lots of interpretations have been used regarding denuclearization as there are different definitions,” Ms. Kang said at a news conference at the Sheraton New York Times Square Hotel, the Korea Times reported.

“Upcoming working-level discussions between Washington and Pyongyang will look into that issue, seriously and thoroughly, to gain a clear concept of the term,” Ms. Kang said.

“I firmly believe the United States, South Korea and North Korea share the general end goal of denuclearization,” she said. “But what matters the most is how they share a more detailed understanding of the term ‘complete denuclearization of the Korean Peninsula’ and the end state of the negotiations before agreeing on steps to advance the process.”