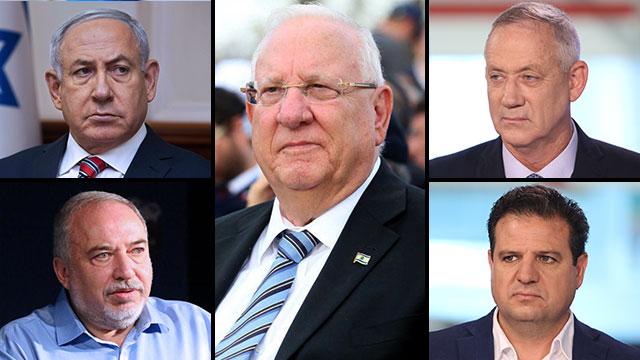 Opinion: The best Netanyahu can do is stall and remain prime minister of a caretaker government for the next six months, while possible indictments are filed and the loyalty of his ministers is challenged; unity is inevitable, but it may take some time for reality to hit

It is clear to everyone involved in the discussions, except perhaps the prime minister, that a third round of elections in Israel in one year cannot be an option.

Forming on a coalition government may take time, it will surely be contentious and raise public ire, but in the end a new government will be formed.

The power held by President Reuven Rivlin stems not only from the law that grants him discretion to choose the candidate he thinks is able to create a coalition, but also from his right to tell the public who is to blame for the failure to do so.

The party blamed for forcing a third election on the Israeli public will emerge weaker, while its opponent is more likely to head the next government.

The loyalty that his ministers and his Haredi partners still show him is touching, but ultimately not sustainable.

The prime minister cannot build a coalition that will provide him with immunity from prosecution in the three corruption cases pending against him.

Not without Yisrael Beytenu leader Avigdor Liberman, who will not side with him as long as the prime minister remains committed to the ultra-Orthodox bloc.

He can try to entice the Labor-Gesher party to side with him, but even if the leader of the party concedes to cross the aisle and join Netanyahu, he will be doing so without at least two of his members.

Blue and White backbenchers are also unlikely to defect to the opposing camp, at least not while the party is still celebrating its electoral achievements.

The best Netanyahu can do is stall. He will remain prime minister of a caretaker government for the next six months and while possible indictments are filed.

The Arab parties’ decision to back Blue and White leader Benny Gantz is nothing short of an historic event and its importance exceeds the political maneuvering of coalition building.

This is a declared decision, motivated by the voters to partake in the Israeli political process, to influence it and to demand a fair share of the political and economic pie.

Balad, which calls for a binational state in place of a Jewish Democratic one, is the smallest of the Arab parties and the only one that has opposed the decision.

The Joint List was the most pragmatic of all parties appearing before President Reuven Rivlin to endorse their candidate.

Their political demands were reasonable. They’ve asked for a government that will take on the problem of violent crime in Arab communities, including the recent surge in murders.

They’ve asked that home demolitions due to zoning violations be stopped.

They demanded that discriminatory legislation against Arab citizens of Israel be reversed.

Netanyahu’s response was quick to come: Gantz the traitor is collaborating with the Arabs, plotting our destruction, he said, directing his remarks at Liberman but viewing his incitement against Arab citizens as a bonus.

Likud’s delegation to consultations with the president included Minister of Culture and Sport Miri Regev.

No one in the presidential residence was able to forget Regev’s about the cost of care for the late Mrs. Rivlin when she was fighting for her life with lung disease. The comments were considered vile, even for a minister known for her brusque manner.

“Gantz must join a Netanyahu-led unity government,” Regev lamented at the Likud meeting with Rivlin, although Netanyahu insists his previous coalition must be the basis for any future one.

A unity government is inevitable – that was determined by the voters.

But politicians may need more time to come to terms with reality and show up for the traditional photo session of a newly appointed government, with the president who shephered it into existence.