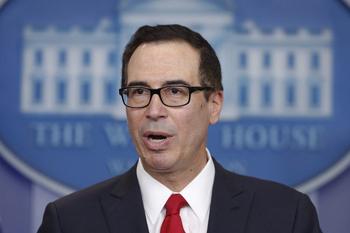 Trump, speaking alongside Treasury Secretary Steven Mnuchin, questioned him about the request that the Chinese delay a trip to meet with U.S. farmers in Montana and Nebraska. Mnuchin had said the trip was delayed at the administration’s request to avoid confusion over the talks.

“Why was that our request, just out of curiosity?” Trump asked.

Mnuchin explained again that the U.S. side “didn’t want confusion around the trade issues.”

Trump then interjected: “Yeah, but I want them to buy farm products.”

Trump added that China had “committed to buy a lot of agriculture” and the United States should ship the products as fast as possible.

The exchange came after Chicago grain traders said Chinese importers on Monday had bought about 10 boatloads of U.S. soybeans – around 600,000 tonnes – to be shipped from Pacific Northwest ports from October through December. News of the deals sent soybean futures prices higher.

People familiar with the talks said that there were no new substantive offers made, but both the U.S. and Chinese sides said the talks were productive, and that minister-level talks would take place in early October.

Mnuchin stressed that the Chinese purchases of U.S. agriculture were “good news” in an interview with Fox Business Network and downplayed any significance to the delay of the Chinese officials’ visit to U.S. farming regions.

“It’s a sign of good gesture that they are back at the table buying agriculture,” Mnuchin told Fox Business Network.

“We just decided the timing of the trip wasn’t necessarily the perfect timing, so they’ll be rescheduling that to after our trade meetings,” he added.

Mnuchin said in the television interview that trade talks with Chinese Vice Premier Liu He and U.S. Trade Representative Robert Lighthizer were set to resume in two weeks.

“It’s actually, I think, it’s not next week, but the following week we’ll be having those talks,” Mnuchin said.

Earlier on Monday, Mnuchin told reporters at the United Nations General Assembly that the trade talks would resume next week.