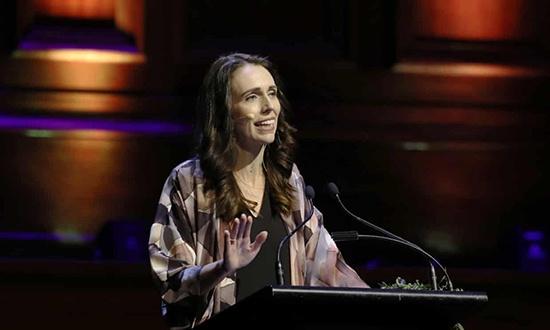 Lauren Gambino in Washington – The Guardian

Jacinda Ardern, the New Zealand prime minister, has said Donald Trump expressed “interest” in her country’s gun buyback program, as the US president faces calls for dramatic changes to the nation’s firearms laws.

After the two leaders met on the sidelines of the United Nations General Assembly in New York, Ardern told reporters that she “sensed an interest” from the US president in the sweeping gun reforms her government passed after the Christchurch mosque shootings in March.

“It was a conversation around our buyback and obviously the work that we have done to remove military-style semi-automatics weapons and assault rifles,” Ardern said.

“We had a conversation around what had happened in New Zealand, how it worked, and I referenced the fact that actually Australia had gone through a similar process and we really learned from them. It was really just sharing our experience, which obviously is pretty unique.”

New Zealand earned international praise for its swift response to the Christchurch massacre, in which a lone gunman killed 51 people and injured dozens more at two mosques in the city.

Days after the shooting, Ardern announced that most semi-automatic weapons would be banned. Weeks later, the country’s parliament overwhelmingly passed a law outlawing certain semi-automatics and compelling owners of such weapons to hand them over as part of the nation’s gun buyback program. So far, owners have returned as many as 15,000 banned firearms.

By contrast, a summer of carnage in the US – punctuated by mass shootings in El Paso, Texas; Midland and Odessa, Texas; and Dayton, Ohio – has prompted calls for sweeping gun reforms but so far no action by its politicians.

Gun buyback programs have always been controversial in the US, even among Democrats who near uniformly support strengthening the nation’s gun laws. But the Democratic presidential candidate Beto O’Rourke has shifted the debate with his vow to take away the millions of AR-15 and AK-47 rifles in possession.

Trump has at times expressed support for expanding background checks for firearm purchases – only to walk it back under pressure from Republicans and the National Rifle Association.

Gun control was only a part of what Ardern described as a “wide-ranging” conversation with the US president, which also touched on trade, tourism and national security.

A readout from the White House press secretary, Hogan Gidley, made no mention of their discussion about the gun buyback program.

“The two leaders discussed a variety of bilateral issues, including the United States steadfast support for New Zealand after the Christchurch attack,” according to the readout. “The president expressed continued support for the sentiment behind the Christchurch Call to Action and vowed to continue partnering with New Zealand to counter online violent extremism.”

In May, Ardern convened the Christchurch Call to Action summit in Paris, where she and the French president, Emmanuel Macron, convened world leaders and global tech giants in an attempt to strengthen efforts to combat online extremism. At its conclusion, the leaders and tech companies signed a pledge to “eliminate terrorist and violent extremist content online”. The US declined to attend and is not a signatory of the pledge.

There was also some dispute between the countries about what to call their meeting. Trump’s public schedule labeled it a “pull aside” while Ardern referred to it as a “bilateral”. Trump’s one-on-ones with the presidents of Pakistan, Poland, Egypt and Singapore were described as “bilateral meetings”.

After the meeting, Ardern downplayed the discrepancy, and noted that the two leaders had spoken for roughly 25 minutes and that Trump’s “warmth and high regard” for New Zealanders shone through in their conversation.

She added that he had a “good knowledge and understanding” of the country and some of the “big personalities that have come out of New Zealand”.

Pressed for details on who Trump had mentioned, Ardern divulged only one name: the left-handed golfing legend Bob Charles.