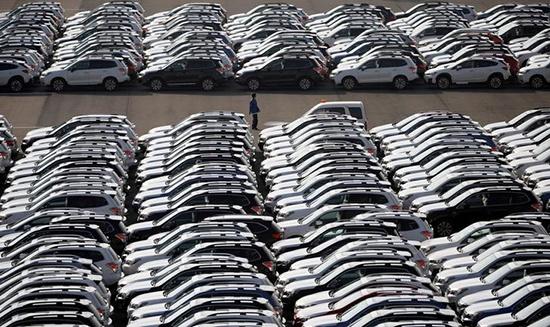 By David Lawder and David Shepardson

A U.S.-Japan trade deal hit a last-minute snag as Japanese officials sought assurances that the Trump administration will not impose national security tariffs on Japanese-built cars and auto parts, people familiar with the talks said on Monday.

U.S. President Donald Trump and Japanese Prime Minister Shinzo Abe are aiming to sign a trade deal at a meeting this week during the United Nations General Assembly in New York that provides increased access to Japan for U.S. agricultural goods and bilateral cuts in industrial goods tariffs.

But the limited trade deal is not expected to include changes to tariffs and trade rules governing autos, the biggest source of the $67.6 billion U.S. trade deficit with Japan.

Trump has refrained thus far from following through on his threat to impose tariffs of up to 25% on Japanese and European car and parts imports, citing ongoing trade negotiations with these partners.

The New York Times earlier reported that Japan was demanding a “sunset clause” that would cancel any trade benefits for the United States if Trump imposes the auto tariffs on Japanese vehicles.

Japanese Foreign Ministry spokesman Masato Ohtaka said that Japan still hoped to sign the U.S. trade deal by the end of September and that there was still time to work out remaining issues.

Ohtaka told reporters in a briefing that U.S. Trade Representative Robert Lighthizer and Japanese foreign minister would discuss these issues at a meeting in New York later on Monday evening.

“Frankly speaking, we still have some time and all my colleagues in the government are making their best efforts to actually meet this target,” Ohtaka said.

Japanese Chief Cabinet Secretary Yoshihide Suga, speaking in Tokyo, told a news conference: “With the U.N. General Assembly meeting in mind, we are accelerating the remaining work, including the wording of a trade agreement.”

Executives at two automakers briefed on the matter said Japan has expressed concerns about signing a deal without assurances that Trump will refrain from imposing tariffs on Japanese automotive exports as he benefits from Japanese agricultural concessions.

These people, speaking on condition of anonymity, confirmed that the issue could delay the signing of a U.S.-Japan trade deal until subsequent weeks.

Details of the U.S.-Japan trade deal have not been disclosed, but people familiar with it say that it will provide U.S. farmers who have been battered by the U.S. trade war with China some relief through increased access to Japan, including for American beef and pork.

But some people say it will provide less than the access they would have received had the United States remained in the Trans-Pacific Partnership trade deal, which Trump pulled the United States out of on his third day in office in January 2017.

The deal also includes a modernization of digital trade rules, which is expected to reinforce the U.S. model of internet development, prohibiting cross-border taxation of e-commerce and data localization requirements.

Trump and Abe a year ago at the U.N. General Assembly agreed to discuss an arrangement that protects Japanese automakers from further tariffs while negotiations are under way.

The trade deal would not require congressional approval, using a trade law provision that allows the U.S. president to make executive agreements to mutually reduce tariffs with a foreign trading partner.