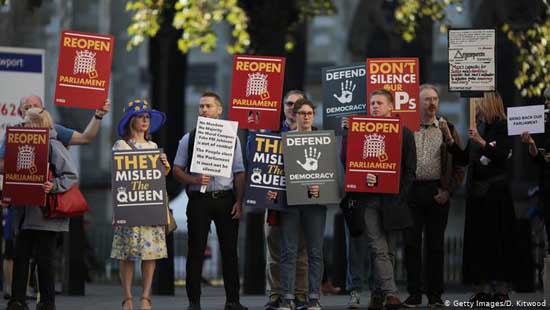 British Prime Minister Boris Johnson is braced for a Supreme Court ruling on whether he misled the Queen and forced an unlawful suspension of Parliament. The case could shake Britain to its constitutional core.

Britain’s Supreme Court is set to rule Tuesday on the legality of Prime Minister Boris Johnson’s decision to suspend, or “prorogue” Parliament. The judgement could throw the UK’s already chaotic departure from the European Union into further disarray.

The prime minister asked Queen Elizabeth II to approve the suspension of Parliament from September 10 to October 14 on the basis of needing time to prepare a new legislative agenda.

His detractors say the real reason was to prevent lawmakers from blocking his Brexit plans, cement his position, and avoid scrutiny. The UK Parliament passed a bill requiring Johnson to request a Brexit extension if no deal has been agreed. Johnson has said the UK will leave the EU on October 31 “do-or-die.”

Why did the Supreme Court get involved?

Following a hearing last week, the UK’s highest court decided to rule on the legality of the five-week suspension. Johnson has been accused of an unlawful “abuse of power.” Judges have been asked to determine whether he misled the Queen. The politically neutral head of state is required to act upon the advice of the prime minister.

What are the possible outcomes?

It is not inconceivable that the judges will say they are not allowed to rule on a political matter. However, they could also judge the suspension illegal and give instructions for Parliament to reconvene.

What would the ruling mean?

If Johnson wins, it would represent a rare victory after a raft of defeats in the House of Commons. Brexit, in one form or another, would be a step closer. If he loses, the UK’s protracted departure from the EU would be set for another delay, at the very least. Calls for Johnson’s resignation will ensue, exactly two months after he became prime minister.

What does Johnson say?

The prime minister insists that lawmakers will have “bags of time” to scrutinize a divorce deal he plans to make with EU leaders next month. And he flatly denied misleading the Queen, saying the reasons to ask for the suspension were “extremely good.”