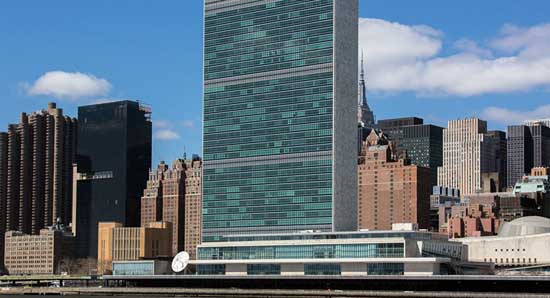 UNITED NATIONS (Sputnik) – The annual United Nations General Assembly (UNGA) debates in New York kick off today, with the latest Iran crisis, climate change, global development and denuclearization expected to be key issues on the agenda of many world leaders.

Starting Tuesday, political leaders will take to the General Assembly’s floor to deliver speeches. The gathering remains the world’s leading and most-watched forum for leaders to gather at the United Nations headquarters to discuss global issues.

This year, Russian President Vladimir Putin and Chinese President Xi Jinping will not be attending. However, 196 representatives from around the world will deliver statements.

The UNGA will also be a hyperactive nerve centre for global diplomacy over the coming week: Including those that were conducted on Monday, some 560 official meetings are planned to be held and UN Secretary-General Antonio Guterres will participate in 140 bilateral meetings when it is all said and done.

According to United Nations tradition, the leader of Brazil will be the first to speak on Tuesday morning, followed by the United States, the organisation’s host country.

Iranian President Hassan Rouhani and Yemen’s President Abdrabuh Mansour Hadi will speak during the week of scheduled General Assembly addresses. Hadi will address the armed conflict that has been ongoing in the country since 2015.

The United Nations has repeatedly called the Yemeni conflict the world’s worst humanitarian crisis, with an estimated 24 million people – nearly 80 percent of the country’s population – currently in need of aid and protection.

In June, international rights organisations put the cumulative death toll in the war as fast approaching 100,000, British media reported. The 100,000 benchmark figure has probably since been exceeded.

Other keynote speakers on Tuesday at the General Assembly will be the leaders or senior ministers from France, Canada, Turkey, South Korea, and the United Kingdom.

Israeli Prime Minister Benjamin Netanyahu, as well as the representatives of China, India, Pakistan, Sudan, and The Bahamas, will also convey their messages to the world on that day. However, Netanyahu, who is seeking to remain prime minister after the Israeli elections last week, is not expected to attend this year’s UN General Assembly.

The North Korean government has recently expressed readiness to resume denuclearisation talks with the United States in the second half of September, but Pyongyang has at the same time been conducting missile tests.

Many world leaders will hold talks on the sidelines of the General Assembly throughout the week in both bilateral and multilateral settings to address issues ranging from the elimination of nuclear weapons and the implementation of the Agenda for Sustainable Development to the situation in Afghanistan and the prevention of an arms race in outer space.

Although there have been reports about the possibility that US President Donald Trump and Iran President Hassan Rouhani will meet during the Debate Week, the counterparts will not convene for bilateral talks.

On Wednesday, Trump is expected to hold a bilateral meeting with Ukrainian President Volodymyr Zelensky on the sidelines of the General Assembly to discuss Minsk obligations, China’s economic activity in the country, energy cooperation, and other mutual matters, a senior US administration official told reporters on Friday.

“They’re going to examine further opportunities as has recently been taken on energy cooperation… they’re going to talk about opportunities for further reform of Ukraine’s economy, additional trade opportunities, and the president is going to speak to his concerns about what he sees as predatory Chinese economic activity in Ukraine to loot Ukraine’s intellectual property,” a White House official told reporters last week.

On Wednesday, Trump will meet with Western Hemisphere leaders at the UN General Assembly to discuss Venezuela, a senior Trump administration official said during a conference call on Friday. Most of the countries of the Western Hemisphere, with the notable exceptions of Cuba, Uruguay, Nicaragua, El Salvador, and Bolivia, don’t recognise the government of President Nicolas Maduro.

US Secretary of State Mike Pompeo on Friday will meet with top Russian diplomat Sergei Lavrov on the sidelines of the UN General Assembly, the State Department announced Sunday.

Pompeo will convene with members of the Gulf Cooperation Council (GCC) and Jordan during the General Assembly this week to discuss a possible response to Iran’s “escalatory violence”, a senior Trump administration official said during a conference call last Friday.

Apart from the General Debate, the UN General Assembly session will, for the first time, review the progress on the implementation of the 2030 Agenda for Sustainable Development on Tuesday and Wednesday.

On Thursday, the UN General Assembly will convene its first High-Level Dialogue on Financing for Development since the adoption of the Addis Ababa Action Agenda.

On Friday, the General Assembly will hold a one-day high-level review of the progress made in addressing the priorities of Small Island Developing States (SIDS) through the implementation of the SAMOA Pathway.

The General Assembly has decided that the high-level review will result in a concise action-oriented and inter-governmentally agreed political declaration.