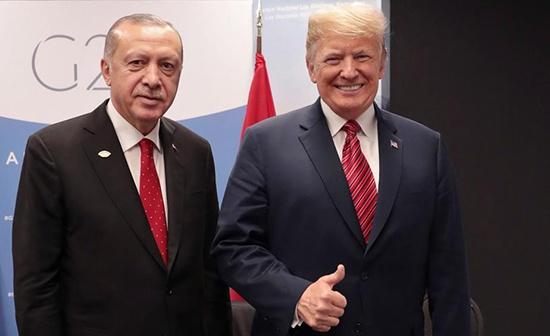 Non-committal on the phone, the US president surprised even Turkish officials with his public support for Ankara’s assault into Kurdish-held territory.

When Recep Tayyip Erdogan ended his call with Donald Trump on Sunday, there was a sense of frustration in the Turkish capital and a feeling that Ankara’s concerns had not been properly considered.

Just hours later those sentiments were reversed, as the White House released an explosive readout declaring its support for a Turkish assault in northeast Syria and upending US policy in the region.

“Erdogan told Trump that the US should either work with Turkey to conduct this operation or just get out of the way,” a Turkish official familiar with the conversation told Middle East Eye.

To the authorities in Ankara, it appears that the US president decided after the call to do just that.

For weeks, the two Nato allies have been working to set up a buffer zone along the Syrian-Turkish border, in an attempt to keep US-backed Kurdish forces at least 32km from Turkey.

However, Ankara has been growing frustrated with the progress, and began to prepare for an assualt into Kurdish-held areas of northeast Syria to clear them of the YPG militia.

Though Turkey considers the YPG an arm of the outlawed PKK militant group, the Kurdish militia has been the US’s principal partner on the ground in its fight against the Islamic State group (IS).

That dynamic has been a source of enduring tension between Ankara and Washington, and as Turkey completed its preparations for an assault last weekend, Erdogan’s administration wanted to reach out to Trump one last time to explain their reasoning for an operation.

According to the Turkish official, who spoke on condition of anonymity, Turkey wanted to express its anger that the US security bureaucracy, namely the Pentagon, was apparently stalling the buffer zone’s implementation.

“Erdogan started to throw all these arguments at him that Trump’s subordinates weren’t honouring the deal, that even though the Islamic State was defeated, the US still had been sending 20 truckloads of weapons to the YPG, and so on and so forth,” the Turkish official said.

Another bone of contention, the official said, was the YPG’s recent building of fortifications near the border town of Tal Abyad, despite recently dismantling defences as a sign of goodwill to Turkey.

The US response had been “bizarre”, the official said. “They said they were destroying them faster than YPG could rebuild.”

However Trump wasn’t interested in any of this, according to the official.

Instead, he asked Erdogan whether the Turkish leader could do anything about the IS foreign fighters currently languishing in Kurdish custody instead of being repatriated and prosecuted by their countries of origin.

Erdogan, the official said, pointed out that Turkey had in recent years deported 6,000 suspected foreign fighters back to their countries, and suggested the two leaders could work together on the issue.

“But he didn’t make any commitment on the issue,” the official said.

“Trump also didn’t respond to Erdogan’s demand on the ‘safe zone’. He said he would consult with his military advisers.”

The commitment came in the readout.

“Turkey will soon be moving forward with its long-planned operation into northern Syria. The United States Armed Forces will not support or be involved in the operation, and United States forces, having defeated the ISIS territorial ‘Caliphate’, will no longer be in the immediate area,” the readout said, referring to IS with an alternative acronym.

“Turkey will now be responsible for all ISIS fighters in the area captured over the past two years.”

Middle East Eye has contacted the White House and US military for comment.

Trump has vowed to pull his troops out of Syria on two occasions this year already, both following calls with Erdogan.

Much of the criticism levelled at the US president following those announcements has been over the fate of IS suspects in Kurdish custody were a Turkish assault to begin.

Despite camps such as the notorious al-Hol lying outside the planned buffer zone, Kurdish authorities managing the detention centres have intimated to MEE previously that forces guarding them would be drawn away by an assault.

A US official said on Monday that Ankara and Washington had no formal agreement on the suspected IS fighters and their families, “but if Turkey was to mount a major incursion, the problem would be all theirs”.

Later in the day, Trump tweeted that he would “totally destroy and obliterate” Turkey’s economy if it does anything he considers “off-limits” and said Turkey must watch over the captured IS fighters and their families.

US officials told local media that nearly 2,000 foreign fighters are being held by the YPG-dominated Syrian Democratic Forces (SDF) in several detention facilities in northern Syria, alongside 10,000 Syrian and Iraqi fighters.

Some reports say al-Hol camp alone is hosting more than 60,000 children and women who are suspected to be affiliated with IS fighters.

Erdogan said on Monday that the US and Turkey would study ways to repatriate the foreign fighters and are looking to “quickly intern” the fighters kept in prisons.

Turkey’s military has been redeploying elite units and armoured vehicles to border towns, with dozens of medics placed near the Syrian frontier over the past month to support any possible offensive.

On Friday, Turkey-backed Syrian rebel groups announced a broad merger and voiced their support for any offensive. It is expected that Turkey will heavily rely on its Syrian rebel allies in the assault.

US troops have already begun leaving northeastern Syria. However, a different senior Turkish official told MEE that Ankara would wait about a week for US forces to fully pull out from the area before launching its offensive.

“But if we see a risk, there would be an intervention [before then],” the official said on condition of anonymity.