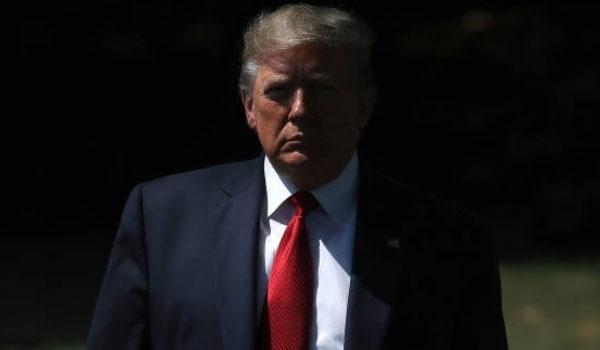 U.S. President Donald Trump threatened Turkey with economic collapse on Oct. 7 should Ankara take action in Syria he deems “off limits” ahead of a planned operation in the country’s northeast.

“As I have stated strongly before, and just to reiterate, if Turkey does anything that I, in my great and unmatched wisdom, consider to be off limits, I will totally destroy and obliterate the Economy of Turkey (I’ve done before!),” Trump wrote on Twitter.

“They must, with Europe and others, watch over the captured ISIS fighters and families,” he said.

“The U.S. has done far more than anyone could have ever expected, including the capture of 100% of the ISIS Caliphate. It is time now for others in the region, some of great wealth, to protect their own territory. THE USA IS GREAT!” he added.

The U.S. president praised himself in a pair of tweets, saying he was elected to end the country’s involvement in overseas wars and the military was depleted before he took the office.

“I was elected on getting out of these ridiculous endless wars, where our great Military functions as a policing operation to the benefit of people who don’t even like the USA.”

“The two most unhappy countries at this move are Russia & China, because they love seeing us bogged down, watching over a quagmire, & spending big dollars to do so. When I took over, our Military was totally depleted. Now it is stronger than ever before. The endless and ridiculous wars are ENDING! We will be focused on the big picture, knowing we can always go back & BLAST!” he said.

Meanwhile, Senator Lindsey Graham, a stalwart Trump ally, lashed out against the decision on Oct. 7 during a Fox News interview he followed up with a flurry of Twitter posts. Graham, who has previously recognized the “legitimate national security threat to Turkey” in northeastern Syria, threatened Ankara with economic sanctions that he expects would be supported by a veto-proof majority in Congress.

Graham said after speaking with Senator Chris Van Hollen, the most senior Democrat on the Senate Budget Committee, the lawmakers would introduce legislation to slap economic penalties on Turkey “if they invade Syria and will call for their suspension from NATO if they attack Kurdish forces who assisted the U.S. in the destruction of the ISIS Caliphate.”

While Trump could theoretically veto such bipartisan legislation, Graham said he expects it to have the support of at least two-thirds of lawmakers that would enable lawmakers to override the president should be try to stymy the legislation.

Graham and Van Hollen are among droves of lawmakers, including top Democratic presidential contenders, who have come out against the Trump administration’s planned draw down in Syria.

Senate Majority Leader Mitch McConnell, the chamber’s top Republican, added his name to those in opposition, saying in a rare public split with the president that “major new conflict between Turkey and our partners in Syria would seriously risk damaging Turkey’s ties to the United States and causing greater isolation for Turkey.”

“I urge the President to exercise American leadership to keep together our multinational coalition to defeat ISIS and prevent significant conflict between our NATO ally Turkey and our local Syrian counterterrorism partners,” he said in a statement.

Trump went on the defensive earlier on Oct. 7, retweeting half a dozen Twitter posts defending his announcement.

“We aligned under Obama not with ‘the Kurds,’ but with the PKK, the sworn enemy of the Turkish Republic, our ally. We were sowing the seeds of a Turkish-PKK war with that policy. We were also driving Turkey toward Russia,” Mike Doran, a senior fellow at the Hudson Institute think-tank in Washington, wrote in one such message.

He was referring to former President Barack Obama.

Kurt Schlichter, a conservative columnist, said that as Turkey nears its operation. “The President is keeping us out of it.”

“The gang that never met a war they didn’t want to fight (and fail to win) will be outraged. When they howl, ask them one thing. Ask them exactly how many American lives it’s worth,” he wrote. “I say ‘Zero.’”

Turkey has long called for the U.S. to partner with it in the fight against ISIL, a terror group Ankara has worked to root out, arresting and deporting its members within Turkey.

Since 2016, Turkey’s Euphrates Shield and Olive Branch operations in northwestern Syria have liberated the region from YPG/PKK and ISILterrorists, making it possible for nearly 400,000 Syrians who fled the violence to return home to Western Syria.