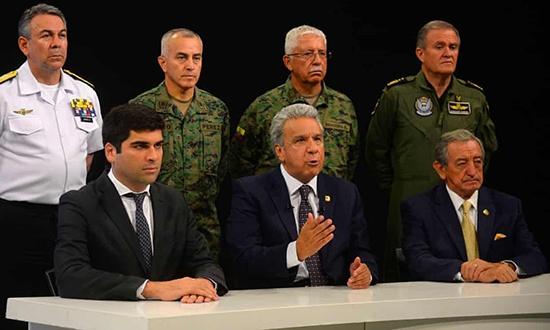 Dan Collyns in Lima –  The Guardian

Ecuador’s president, Lenín Moreno, has said he has moved his government from the capital in Quito to the coastal city of Guayaquil amid violent protests over the end of fuel subsidies.

Images from Quito showed protesters hurling petrol bombs and stones, ransacking and vandalising public buildings as well as clashing with the police in running battles late into the night.

“[This] is not a protest of social dissatisfaction faced with a government decision but the looting, vandalism and violence show there is an organised political motive to destabilise the government,” Moreno said in televised address on Monday, flanked by the vice-president, defence minister and military top brass.

Moreno, 66, who has moved away from the leftwing policies of his predecessor and one-time mentor Rafael Correa, has said he will neither tolerate disorder nor overturn the scrapping of fuel subsidies as part of a package of austerity measures.

Moreno accused political opponents of orchestrating an attempted coup and blamed associates of Correa of infiltrating the protests as part of a plot to topple his government, without providing evidence.

In a tweet, Correa said Moreno was “finished” and called for elections.

The president faces a stiff challenge from indigenous groups and others who blocked some roads for a fifth day from Monday morning with stones, tyres and branches. Indigenous-led protests brought down three presidents in the years before Correa’s rule.

Rioters in Quito forced their way into the comptroller general’s office and vandalised the assembly building on Monday. It followed days of violence in which protesters burned military vehicles, destroyed dozens of rose farms, a dairy and an oil production facility. The outnumbered security forces have been unable to prevent much of the destruction.

The vandalism was an “attempt to take over the seat of parliament”, Ecuador’s congress said afterwards.

The petrol and diesel subsidies had cost the country close to US$1.4bn (£1.1bn) annually, according to official sources. They were lifted last Tuesday as part of a US$4.2bn loan deal with the International Monetary Fund reached last year that hinges on belt-tightening reforms.

The move sparked nationwide protests as prices rose overnight by about a quarter for petrol and double for diesel. A state of emergency was imposed on Thursday. Lorry and taxi drivers forced a partial shutdown of Quito’s airport and roadblocks have paralysed trunks roads across the country.

As of Tuesday, 570 people had been detained. Two dozen police officers have been injured and a man died when he was hit by a car but an ambulance was unable to reach him due to the demonstrations, said the government.

Moreno was shot in 1998 in an attempted robbery and thereafter has used a wheelchair. He was elected in 2017 as the candidate for Correa’s centre-left party but has since moved to the right. Though he enjoys the support of business and the military, Moreno’s popularity has sunk to under 30%, compared with 70% in 2017.

As well as ending fuel subsidies, the government is reducing the state workforce and planning some privatisations.