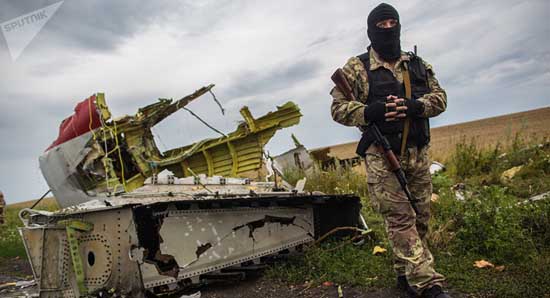 The Malaysian Airlines Boeing 777 crashed on 17 July 2014 in eastern Ukraine while en route to Kuala Lumpur from Amsterdam, as the region was mired in a conflict with the new government following a coup earlier that year. All 298 people aboard, mostly Dutch citizens, Malaysians, and Australians were killed.

Dutch lawmaker Chris van Dam and a designated spokesman for the investigation into the MH17 crash announced that the Netherlands had launched another probe into the tragic events of July 2014. This time the investigators put under scrutiny Ukraine’s role in the crash of the passenger jet.

Chris van Dam said Tuesday that lawmakers unanimously voted to probe Ukraine’s actions in the summer of 2014. In particular, the new inquiry seeks to find out why Kiev did not order the closure of the country’s airspace over Donbass during the peak of fierce skirmishes in the eastern part of the country.

Last week, Chris van Dam told the RTL broadcaster that “the importance of a full fact-finding investigation into the closure of airspace above eastern Ukraine is about more than just state liability”.

In 2015, the Dutch Safety Board ruled that there had been sufficient grounds for Kiev to close the airspace above the active conflict zone in the east of the country.

Following the tragedy on 17 July 2014, Kiev and the self-proclaimed republics in Donbass blamed each other for the downing, with the latter stressing that they had no such firepower that would allow them to down a jet at cruising altitude.

The United States and a number of European nations, for their part, rushed to accuse Russia of the incident – an allegation made before an official investigation was launched.

Shortly thereafter, the Netherlands set up a Joint Investigative Team (JIT) to probe the MH17 case, but left Russia out of the process despite the latter’s consistent offers to assist in the probe.

JIT concluded first that the Boeing 777 was downed by a Buk missile, ostensibly launched by a Russian anti-aircraft missile brigade – stationed in the city of Kursk – not far from the Ukrainian border. At the same time, the Dutch-led team refused to share evidence that would confirm the accusations.

Moscow has repeatedly denied the JIT findings, saying that the claims are unfounded and the investigation is biased. The Russian side has also emphasized that after being denied access to the probe, Moscow carried out its own investigation, which showed that it was an obsolete projectile produced in 1986 – belonging to Ukrainian forces – that downed the ill-fated plane. Dutch investigators, however, ignored the evidence.

In September, an alleged witness and potential suspect in the MH17 case, the ex-commander of an air defence unit in the city of Snezhnoye – a territory controlled by the self-proclaimed Donetsk People’s Republic (DPR) – was transported from Ukraine to Russia under the Moscow-Kiev agreement on simultaneous detainee swap. In July 2014, Tsemakh was on active duty in Snezhnoye.

A spokesperson for the Dutch embassy in Moscow said that the Dutch Prosecutor’s Office had asked colleagues from Russia provide legal assistance to question Tsemakh as part of the investigation.